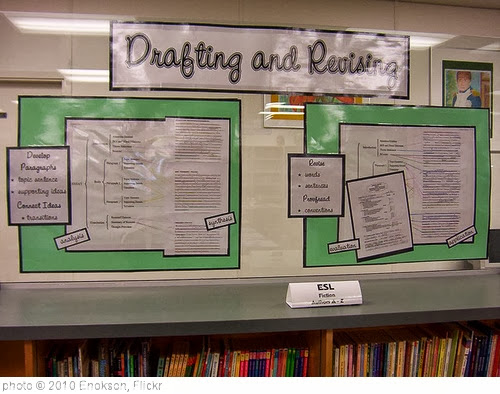 One day after I posted the last in a three part Education Week Teacher series on teaching writing in the context of the Common Core Standards, a study was released suggesting that over one-half of “evidence-based practices” in writing instruction are not “signaled” in those standards.

This is a quote from one of the researchers in Sarah Sparks’ article about the study in Education Week:

“Standards don’t specify the how to, they specify the what to teach,” Troia said, “but they are supposed to ‘sign-post’ or signal to teachers what they might teach.”

Sarah’s post made the study sound interesting enough for me to pay the $12.50 it cost to get past a paywall.

The researchers identified thirty-six “evidence-based practices” in writing instruction (it was a little unclear to me how they chose them, but I assume they were the practices with the most research behind them) and found that over half of them were not “signaled” in the Common Core Standards. Those included emphasizing feedback, the use of text models, teaching grammar in context, and helping to develop student intrinsic motivation.

The authors really try hard in at several points to say their study is not a critique of the standards but, I’ve got to say after reading the study, it’s hard not to look at it any other way.

I think it’s a worthwhile document for teachers to have. It’s short and concise. It’s an excellent summary of writing instruction research and, even if the CCSS don’t encourage them, that doesn’t mean we can’t…

I’m adding this post to My Best Posts On Writing Instruction.

“Skype In The Classroom”

“Teachers Are Guardians, Not Guards”