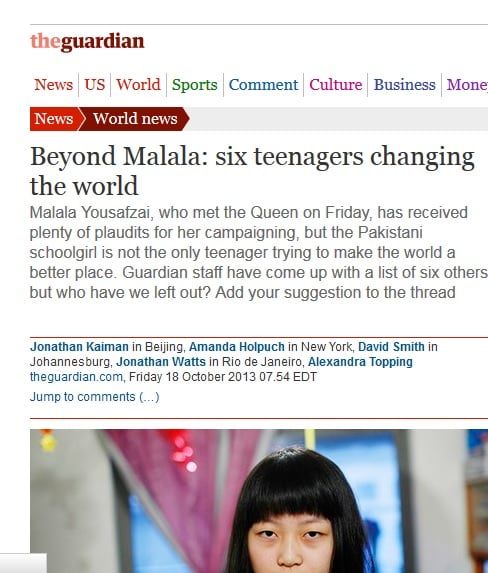 After all the attention — deserved — shown recently to Malala Yousafzai, I thought I’d quickly put together a list of resources on other potential teen role models in the news.

I also have a number of resources on young mountain climbers at The Best Sites For Learning About Mount Everest.

Here are some other useful materials:

The New York Times Learning Network has a regular feature called Teens In The Times. They also have a particularly useful post that can be used with any of the resources on this list — it’s called Teaching With ‘Teenagers in The Times’ and has great lesson plan ideas.

Beyond Malala: six teenagers changing the world is from The Guardian.

The other Malalas: girl activists in the developing world – interactive is from The Guardian.

The Cramm is a news digest written by teens, for teens.  Learn more about it at NPR.

Next Generation Leaders is from TIME.

This Is Interesting: “21 Lessons From America’s Worst Moments”