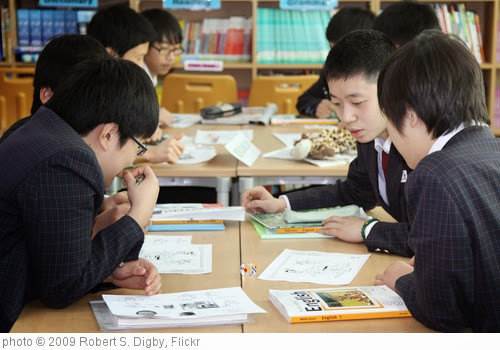 I have many “Best” lists related to using online games with English Language Learners, and you can find them all at A Collection Of “The Best…” Lists On Learning Games.

I’ve also written a lot and published a number of posts and resources related to playing non-online games in the classroom, but just realized I had never brought them all together in one place.

Here they are (feel free to offer more suggestions!):

Here are two excerpts from our book on teaching ELLs:

Using Games in the ELL Classroom, Part I

Awhile back, I invited ESL teachers to send in their favorite games and posted them:

The Best Language Learning Games (That Are Not Online)

In Pursuit of the Excellent Game is an excellent piece from TESOL on using games with ELL’s.

Articles on TEFL games is by Alex Case.

Humanising Language Teaching is one of my favorite online journals, and they’ve just published the newest issue. There’s always a lot of good stuff in it.  I’d like to highlight a very useful article titled “Why Use Games in the Language Classroom?” by Adam Simpson . The article makes a number of good points and points to helpful research. It’s definitely worth reading.

A homemade revision game is by Sandy Millin.

Games in the language classroom: the When & the How is by Adam Simpson.

The Rolling Question Game is from The EFL Smart Blog.

How well do you know your friend? (Adapting the newlywed game for WL class) is a fun idea for a speaking activity.

A low-prep, low-tech, effective game for revision is from A Hive of Activities.

Whiteboard Soccer is from David Deubelbeiss. I’m adding it to the same list.

My ELT Rambles shares a number of good classroom games.

Using 80s gameshows to teach languages is from The Guardian.

Most people, including ESL/ELT teachers, are familiar with the game Pictionary. It’s a great language-learning activity.

If you ever want to show other teachers or students a video modeling the activity, Jimmy Fallon has you covered:

This Is Wild! Jimmy Fallon Debuts Another Great Game For English Language Learners

Kaboom! The Explosive Team Review Game (With an added twist…) and Speaking Bingo are both from Lizzie Pinard.

THE REAL TRICK: TURNING A TEST INTO A GAME is from tekhnologic.

Word Links: A Vocabulary Game is from tekhnologic.

Just Google It is a list and description of fun Google-related games. It’s from Elt-Cation.

I’ve shared a number of games Jimmy Fallon has played on his show and how they could be applicable to the ELL classroom. Now, here’s one from a different show, The Late Late Show with James Corden, who models how “Guess Who?” could also be used as a language development activity. I’m adding this to The Best Ideas For Using Games In The ESL/EFL/ELL Classroom.

Russel Tarr has a nice blog called Tarr’s Toolbox where he shares some very good classroom strategies. One that I had never thought of before was using a Venn Diagram as a classroom game. A quick description of it is that the teacher draws a Venn Diagram on the board, numbers the areas, and has students complete it in groups or on their own. Then, the teacher calls out the zone and the first student group with a correct answer gets points. I think it could be modified in a number of ways, including have groups with small whiteboards and everyone having an opportunity to answer but, one way or another, it’s a great way to utilize the higher-order thinking concept of categorization in a game format.

Having Fun With Tearable Sentences is from tekhnologic and suggests a lot of neat variations to the popular ESL “Messenger and Scribe” game.

Spelling doesn’t have to mean Test is from Anglo Teachers.

Jigsaw Puzzles As A Language-Learning Activity

Teaching Games is a nice collection of language-learning…games.

5 of My Favorite English Games for ESL Students is from Hub Pages.

Not Hangman Again is a PDF full of classroom games, shared by the British Council.

Adapting “The Match Game” Into A Classroom Language-Learning Activity

Spelling races with mini-whiteboards is from ELT Planning.

1 WORKSHEET – 10 GAMES is by SVETLANA KANDYBOVICH.

What’s your favourite class game? Let us know – add it to our TeachingEnglish padlet! https://t.co/uYKqgZOTmb pic.twitter.com/ZkpzmKzq7Y

Here’s another one Jimmy Fallon game that might have potential. In this version, guest have five seconds to describe a movie and the other has to guess the title. Since our ELLs have vastly different background knowledge, I doubt if using movies or many other topics would work. However, you could use it as an end-of-unit activity (for example, after studying about food) and apply to the game to those topics:

Say the Same Thing has potential as a language-learning game.

Circle Games is from the British Council.

Ss loved this vocabulary game! Roll the 🎲to determine which word to use. 11 and 12 means you have to pick 2 words to use together. pic.twitter.com/fuxIgQEnSn

Adapting your go-to games: backs to the board is by Mike Astbury.

PLAY & LEARN is from ELT-Cation. It shares a nice list of games.

Games to play with the word study: (a) Wordo – write selection of words on the whiteboard and have students practice spelling/printing on a game board (I make 9 squares for primary and 12 squares for higher grades). I throw a paper ball and hit words on the board.

Thank you @Toppel_ELD for the great idea! I modified the game to review school tool vocabulary with my brand new newcomers. I can’t wait to adapt for other language lessons! pic.twitter.com/me0880i0Ru

Fred Jones has a good list of classroom games.

TELEPHONE DICTATION: A TWIST ON RUNNING DICTATION is from Fun For Spanish.

This new skit from Saturday Night Live is a little off-color, but I thought the game idea of “What’s Wrong With This Picture” was a good one that could be used with English Language Learners. Teachers could find or draw their own (or use the images in this video) and/or have students draw ones that they could use to challenge their classmates. Students could say or write their responses. It’s a “take” on the use of hidden images (see The Best “I Spy” (Hidden Object) Games For Vocabulary Development):

Six collaborative games for competitive English language classrooms is from The British Council.

Games4ESL is a neat YouTube video with…videos that can be used as games.

Foto frenzy- a Picture Talk game is from SenoraChase.

This game board will help students revise all kinds of vocabulary items in a simple and effective way —and no dice are needed. 😉https://t.co/KxD53q3PuK pic.twitter.com/FmBACZ7OEF

13 GRAMMAR GAMES AND ACTIVITIES FOR FUN LEARNING is from English Teaching 101.

Five YouTube chat show games to practise English in class is from The British Council.

Games for Growing Language is by Katie Toppel.

The NY Times has a number of online word games. They’re too challenging for ELLs, but one idea I have is using the concepts to have students create paper versions for their classmates to play (though I’d love to hear if you know of tools that could be used to make ones online). They’d also be easy enough for me to create them. The two that caught my attention were Spelling Bee and Letter-Boxed.

Speaking of potential games, Jimmy Fallon uses several great ones on his show that I have adapted for my classroom, and you can see those on earlier on this list.  A newer one is called Face-Off  (I’ve embedded a video of it below) and I don’t think it’s one of his better ones.  However, I am wondering if it hold some potential for an ELL classroom.  It would obviously be great if you are teaching “feelings,” but I’m not sure if it could be used for other topics?

How to Bring Traditional Games to World Language Classes is from Edutopia.

A five-minute primary game where everyone’s a winner is from The British Council.

Quick Wins is from Leo Languages. It’s a nice list of games.

I’ve previously shared a number of games from Jimmy Fallon’s show that I’ve adapted to my ELL classes, and you can find them earlier in this post.  I got a simple idea for another one after seeing his “Picture This” segment, where he jokingly compares how two celebrities or companies post the same caption to two different photos on Instagram (see below).  It game me an idea of a game, which a ton of other teachers probably have been using for years, where I show a picture, along with two or three different captions, and then students have to pick the correct one.  It would be easy to create them on Quizizz.

ELL teacher Kay Elizabeth has given me permission to share an incredible Google Doc she has created about adapting popular games for ELLs.

Using Games to Develop Language with Middle and High School ELs is by Valentina Gonzalez.

New Link For My Article, “Developing Teacher Leadership For The Long Haul”

“Best” Lists Of The Week: Music

“Portaportal” Is A Nice Link Collection

The Best Articles I’ve Written In 2013