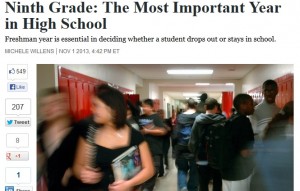 The Atlantic just published what I think is a pretty important article titled Ninth Grade: The Most Important Year in High School (and I’m not just saying that because I primarily teach ninth-graders).

Educators are increasingly focusing on the ninth grade as the year that determines whether a young person will move on or drop out of school. According to research published in the journal Education, ninth graders have the lowest grade point average, the most missed classes, the majority of failing grades, and more misbehavior referrals than any other high-school grade level. Ninth grade has increasingly become a “bottleneck” for students: A joint report from Princeton University and the Brookings Institution found “in 1970, there were 3 percent fewer tenth graders than ninth graders; by 2000, that share had risen to 11 percent.”

“The Best Posts On Involving Fathers In Schools”