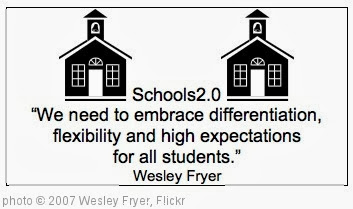 Differentiating the other way, however, is another story. And one of my goals this year is to get better at providing a more intellectually stimulating environment for some of my students who want it and/or who I think need it.

As our principal, Ted Appel, succinctly put it, these kind of strategies might fall into two broad “camps” — one that might entail different materials or even a different location and, the other, having students do something different with the same materials everyone else is using.

One way I’ve done the former in the past and during this year is with the formation of independent book discussion groups, which I describe (with supporting materials) here.

A new strategy I’m trying is expanding on an idea suggested by my talented colleague Jeff Johnson, who has his students develop prompts to which they would respond.

After asking which students might be interested in doing more intellectually challenging assignments that are tied to the goals they have made for themselves (which, in my ninth-grade classes, is often “become a better writer”), I asked them to make a list of things they were interested in.

Next, I had individual conversations with them during our silent reading time, pointing out that they had identified they wanted to become better writers. I reminded them that we talked a lot about how good readers often ask questions of their reading, and also reminded them about discussions we had about Bloom’s Taxonomy.

I then gave them a copy of a list of question-starters from Bloom’s (it’s the third page) and told them that sometimes when there might be times when other students are doing one thing, I might ask them to create their own writing prompt using one of the higher-order question-starters. One example I used was if we were reading about tornadoes, they could choose the question-starter “How can you improve_________?” and they might fill in the blank with “tornado shelters.” They would then write a one paragraph response to that prompt using the “ABC” outline (Answer the question; Back it up with a Quotation; Make a Comment or Connection — you can read more about it at My Best Posts On Writing Instruction). It would have to be something in which they had genuine interest. I also told there might be times I’d ask them to create a prompt from the list of things they listed as interests.

I’ve just tried it a little so far, and it’s gone well.

I’d love to hear other ideas from readers about realistic differentiation strategies you’ve used to help your students who desire/need more of an intellectual challenge….

Darfur: Teaching About The Issues