Highlights Of A Reddit Chat With Angela Duckworth & Roland Fryer 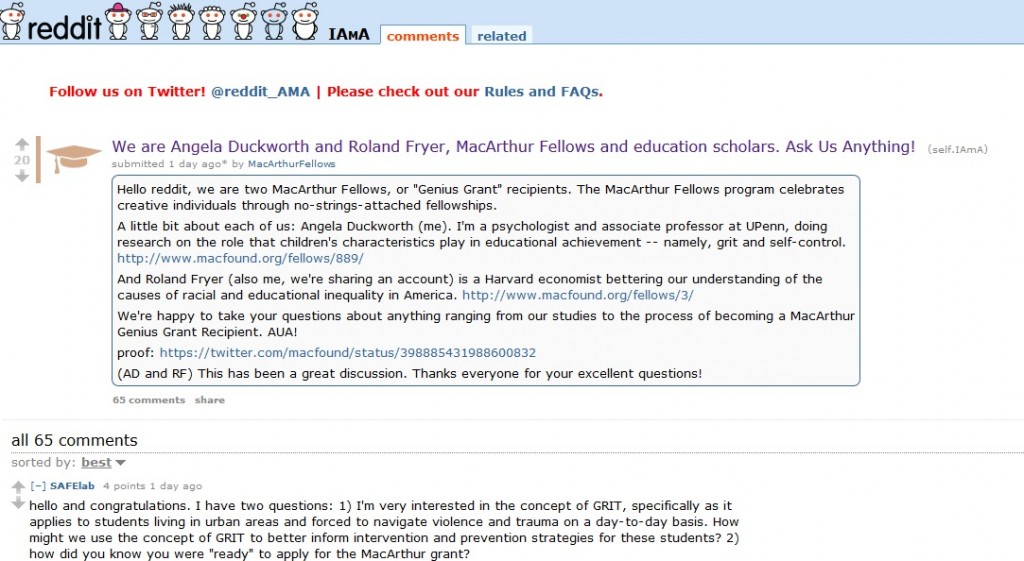 As regular readers of this blog know, I’m no fan of Fryer’s work, and nothing he said in the chat made me elevate that opinion.

Angela Duckworth, though, is a different story, and I’ve been very impressed with her research on grit (see The Best Resources For Learning About The Importance Of “Grit”). And I think she share some important and useful info on Reddit.

I think the most important piece of research she shared, though she made it clear that it’s not solid and it’s an “informal” finding, was this:

I do think there are things we can do to improve grit and self-control. Most of my ideas (things I think) haven’t been tested, but in this informal setting, I will say that I think (but don’t know yet for sure) that just being around a lot of people of exemplify these qualities should help.

Even though, to a certain extent, this is common sense, this particular comment is going to be very helpful to me. Coincidentally, I’m doing my lesson on grit right now in class, and being able to share this quote (students have been reading about her research and watching her videos) can, I think, apply a little peer pressure — “if I show grit, then I’m helping my classmates and, if don’t show it, I’m hurting them.”

Here are some other things she shared that she believes could help people develop grit:

I’m not convinced about her perspective on self-control — believing that it’s a limited resource doesn’t mean it has to be conserved. It means that you have to be strategic to make sure it gets replenished (see The Best Posts About Helping Students Develop Their Capacity For Self-Control). I don’t believe most research supports Prof. Duckworth’s position on self-control (which she shares with another person whom I admire, Carol Dweck) and have written about it specifically at Our Students Are Not Supermen & Superwomen.

I was struck by her response to a question that, though not specifically, seemed to be touching on the 10,000 hour rule:

She also referred to a good “This I Believe” piece by Martha Graham.

Finally, there was this interchange:

Angela, You’re at UPenn, in Philadelphia, where it seems like schools are closing left and right and the whole system is in extreme turmoil. How can low-income kids be expected to show continued grit and fortitude in those kinds of settings, in the face of closings, mergers and such instability?

(Angela Duckworth) You bring up an important point. The situations in which people find themselves has a huge effect on outcomes. And, I don’t want attention to grit and other aspects of character to imply that we don’t need to work on improving the situations of kids – their neighborhoods, schools, opportunities, etc. But, it’s also true, that for kids in the schools (and by the way, my two kids are in the Philadelphia schools as of this year, since we moved from the ‘burbs), they have little choice other than to ask “How can I, without changing the whole system” do as well as I can? What can I do?” In other words, kids are not to blame for their situations, and situations are important, but kids also need to develop a sense of responsibility and agency about their lives. The road may be bumpy, and that’s not necessarily their fault, but they need to think of themselves as in the driver’s seat, not the passenger seat.

I do wish she had made a stronger point about how grit and SEL not being enough, especially since “school reformers” are using her research as part of the “No Excuses” mantra.

At the same time, I do agree that helping our students develop grit is one thing we can do in dealing with the world “as it is” instead of just operating in the world “as we’d like it to be.”

If you get a chance, read the Reddit transcript and let me know your thoughts on what you see.

Quote Of The Day: Reflection Is Important