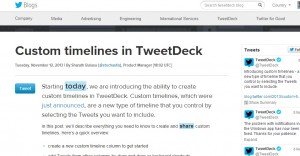 As regular readers know, I’m a big fan of Storify as an excellent tool to curate and tweets around a particular topic (you can see all my Storify stories here).

Twitter announced that its TweetDeck tool added “Custom Timelines” as a new feature. You can read all about it at that link, but, basically, you can drag-and-drop any tweets you want into a timeline that you can then embed.

In other words, it sounds like it can do the primary task that Storify does. Of course, Storify also lets you drag-and-drop images, websites, videos, and other resources off the web into your collection, which Custom Timelines don’t allow you to do — at least not yet.

And I haven’t actually tried Custom Timelines yet, so perhaps it isn’t as easy as TweetDeck’s screenshots show it to be.

I’ll play around with it later this week. This just points out the fragility — again — of all these Web 2.0 tools, and of the content we we create using them. Perhaps I’m missing it, but there doesn’t appear to be any way to back-up Storifies that are created now. I’m going to contact them to see if that’s possible….

I’m adding this info to The Best Resources For Beginning To Learn What Twitter Is All About.

1-Time.org Is A Simple Website-Builder