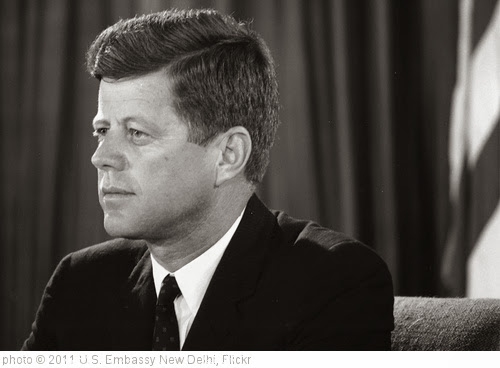 Check out the JFK lesson I’ve posted at The New York Times.

The fiftieth anniversary of President Kennedy’s assassination is coming up next week, and I’ll certainly be making additions to this list.

JFK in Photos is from The Atlantic.

Textbooks Reassess Kennedy, Putting Camelot Under Siege is from The New York Times.

5 Headlines That Would Have Been If JFK Lived is from ABC News.

JFK Assassination: A look back at the death of President John F. Kennedy 50 years ago is from CBS News.

The John F. Kennedy Presidential Library is a treasure trove of accessible resources though, of course, it’s probably safe to say that they won’t be entirely objective. The three best resources there are:

A collection of many online interactives.

The Legacy of President John F. Kennedy – 50 Years Later is an extensive collection from the PBS News Hour.

Lessons On American Presidents has one on President Kennedy for English Language Learners.

Eyewitness to History: An Interactive Map of the Kennedy Motorcade

Feel free to leave suggestions for other resources to include here.