The Best Posts On Curiosity 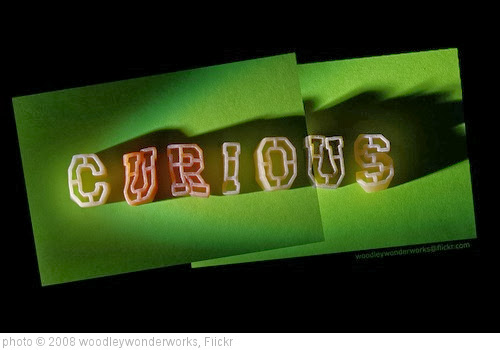 I was prompted to write this post after reading a piece this morning in Scientific American about a very intriguing study. The S-A article is titled Openness to Experience and Creative Achievement.

The article is a big confusing — at least, to a layperson like me. Fortunately, however, the author links to another study that supports his conclusions, and that study was much more accessible to me.

To quickly summarize it — at least, my understanding of its conclusions — both studies find that achievement (academic and otherwise), and especially creative achievement, require three qualities: intellect, conscientiousness and intellectual curiosity. It’s that last quality that you don’t hear much more — intellectual ability and “grit” get a lot of attention, but what the second study calls having a “hungry mind” hasn’t been written about nearly as much.

I think that this finding has some potential for use in the classroom, especially when we work with students on the importance of asking good questions. I know that I always have a disproportionate number of students, for example, who aspire to be video game designers, and incorporating these studies in a life skills lesson sure wouldn’t hurt!

Here are some other resources on the importance of curiosity:

“The Hook, Curiosity, and the Brain”

The Case for Curiosity

How Can Teachers Foster Curiosity? is from Ed Week.

The Psychology of Curiosity

Research Says / Curiosity Is Fleeting, but Teachable is an excellent piece by Bryan Goodwin.

“Curiosity improves memory by tapping into the brain’s reward system”

Curiosity: It Helps Us Learn, But Why? is from NPR.

What A Great Idea — “Surprise Journals” — & It Has Student Examples, Too!

8 HABITS OF CURIOUS PEOPLE is from Fast Company, and could be a very accessible article for students to read.

Good Video On The Science Behind Curiosity

Curiosity Prepares the Brain for Better Learning is from Scientific American.

Can We Teach Curiosity? is by Sarah Donarski.

Facilitating Student Curiosity: Strategies and Resources is from Ed Week.

Researchers Find That Curious Students Achieve More Academic Success. In Other News, The Sky Is Blue

How to Cultivate the Curiosity Classroom is from ASCD.

Piqued: The case for curiosity is from The Hechinger Report.

The Business Case for Curiosity is from The Harvard Business Review.

Character Lab has come out with new resources on encouraging curiosity and gratitude.

NEW STUDY FINDS THAT THINKING WE MIGHT KNOW SOMETHING, BUT THEN DISCOVERING WE DON’T, IS MOST MOTIVATING TYPE OF CURIOSITY

Research Matters / Cultivating Curiosity in Teens is from ASCD.

How to make your pupils curious enough to learn is from TES.

Lighting the wick in the candle of learning: generating a prediction stimulates curiosity is a new study.

Why aren’t students curious in the classroom? appeared in BOLD.

The SEL Skills That May Matter Most for Academic Success: Curiosity and Persistence is from Ed Week.

Wonderful Video (& How To Use It In Class): “Confessions Of An Idiom”

“Cost of college: Grads break even by age 33”

Video: “Animated map shows how religion spread around the world”