I do an annual “The Best…” list on the “words of the year” that various organizations name at about time of the year. Groups have begun their announcements, and I’ll add to list as more do the same.

Oxford Dictionaries named “Selfie” as their word of the year, and published infographic:

by infogr8.
Explore more infographics like one on the web’s largest information design community – Visually.

And here’s an article from The Atlantic about year’s Oxford’s decision:

Great Job, Narcissists: ‘Selfie’ Beat Out ‘Twerk’ for the Oxford Dictionaries Word of the Year.

Merriam Webster chose “science” (if you ask me, that’s sort of a strange decision).

The Week wrote about that choice in What makes a word the word of the year?

And the Boston Globe has published an interesting article: Words of the Year: Where are they now? Why some endure, and others become embarrassing.

A Wordnado of Words in 2013 is from The New York Times.

Narcissistic Or Not, ‘Selfie’ Is Nunberg’s Word Of The Year is from NPR.

The Words That Popped in 2013 is from The Wall Street Journal.

Words for the Dumpster is from The New York Times.

Beyond selfies and twerking … the words that really mattered in 2013 is from The Guardian.

Words that should be banned in 2014 (selfie, twerk, etc.) is from The Washington Post.

Be gone, selfie! And take twerk with you! is from CNN.

“Because” Wins 2013 Word of the Year Vote, Because Awesome is by Ben Zimmer.

Misspelling of the Year 2013 is from Dictionary.com. I’m adding it to the same list.

I just discovered a neat feature at the Merriam-Webster website — Trend Watch.

They apparently keep an eye on words that “spike” — lots of people looking up their meaning at the same time — during the year, and then track down the reason for their popularity. 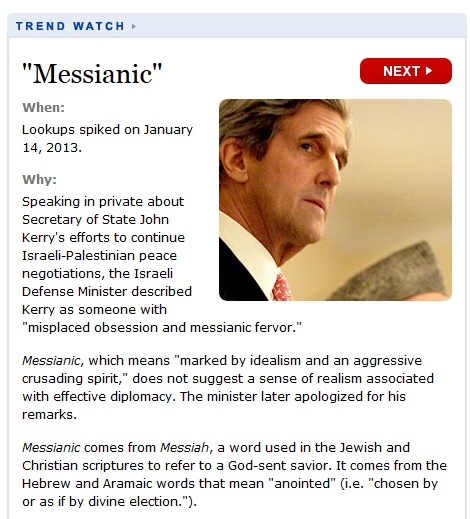 They keep them all in one place so, for example, you can see 2013: The Year in Words.

13 words of the year from other countries is from The Week.

Best Lists Of The Week: Animals