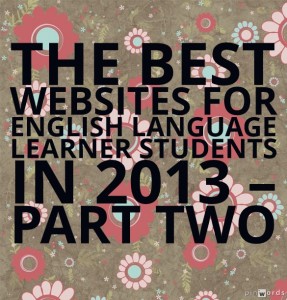 Here are my choices for The Best Websites For English Language Learner Students In 2013 – Part Two:

I’m obviously biased, but I think the weekly posts I write for the New York Times Learning Network on teaching ELLs are one of the best resources on the Web for both students and teachers.

LSO Play is an interactive experience with the London Symphony Orchestra. Students can learn about orchestras and musical instruments, but it’s hard to explain the many different aspects of the site. Just check it out — you won’t be disappointed!

Homicide Hunter is a very interactive game from The Discovery Channel. It can be played with a webcam or not. It’s a combination of a chatbot and a choose your own adventure game. I’m adding it to The Best Places To Read & Write “Choose Your Own Adventure” Stories.
Trippin is an engaging and innovative site for English language-learning that combines “edgy” videos (classroom appropriate — just “hip” enough to be particularly attractive to teenage learners), quizzes, and geography. Though I obviously didn’t view all the videos and try-out all the interactives, they seem to be laid-out sequentially (and, I assume, with graduated levels of difficulty) — in other words, players are not allowed to do them out of order

It’s been created by Mau Buchler, a twenty-year veteran of teaching English. He’s been developing the site for three years. It’s free (though there are indications on the site they at some point there might be a cost), and I’m looking forward to having my students try it out next week.

I’m adding it to The Best Geography Sites For Beginning & Intermediate English Language Learners and may add it to other “Best” lists, depending on what my students and blog readers tell me.

Broken Picture Telephone is an online “take-off” on the old game of “Telephone” (where one person whispers to another and so on — a favorite game of ESL teachers to promote speaking practice. It had been taken off-line three years ago, but just came back. I’m just going to quote from Jay is Games to describe how the online game works:

All players have to register (which is quick and easy), and then you can start a game that is “private” so only invited players can participate. Unfortunately, I’d lay odds that it’s likely to be blocked by many school Internet content filters, but maybe not…

I’m adding it to The Best Online Games Students Can Play In Private Virtual “Rooms.”

Sound Gecko looks like a potentially useful tool — it lets you listen to the text on any website, and is read by a computer generated voice. The free account has some limitations, but seems relatively generous. I’m adding it to The Best Listening Sites For English Language Learners.

Vidtionary is a fascinating online dictionary that uses mostly short and unique video clips from Vimeo to define English words (it’s small, but growing). I learned about it from the Center For Applied Second Language Studies.

Lingua.ly is an innovative free Chrome extension to help people learn English, Spanish, English, French, Hebrew and Arabic. After installation and choosing your present language and the one you want to learn, you can click on any unfamiliar word on any website and you’ll be shown it’s definition in your first language, along audio on how it’s pronounced.

That works well, but isn’t that innovative — there are a number of similar tools.

However, it then goes a step further. It saves the words you have clicked on and allows you take quizzes and review them.

News in Levels provides several different “levels” of the same news article and provides audio support for the text. The site is clearly focused on ELLs, with the “lowest” level an image annotated with vocabulary words, which also has audio support. Unfortunately, the site doesn’t have interactive activities that students can do, but I guess you can’t have everything.

Wow, Google Translate added Hmong to its seventy languages in May, and I recently found out about it! Previously, Bing was the only major online system to support that language. That will certainly come in handy with our school’s large Hmong population.

The Best Sites For Learning About The Vote In Southern Sudan