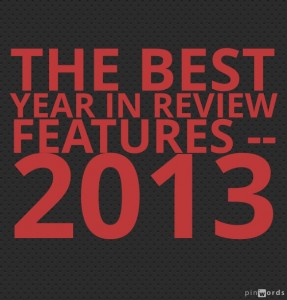 I’ve usually done two different types of “year in review” annual posts — one focusing on photo collections and the other on non-photo galleries.

This year, though, I’ve decided to just do one list combining both, and will continue to add them as new ones become available.

The Best Year-End Collections Of Images — 2012

The Best Year-End Collections Of Images — 2011

The Best Year-End Collections Of Images — 2010

The Best Year-End Collections Of Images — 2009

The Best Year-End Collections Of Images — 2008

Here are my choices for The Best Year In Review Features — 2013:

Looking Back at 2013 | Ideas for Reflecting On and Teaching About the Year That Was is a terrific post from The New York Times Learning Network. It’s full of great lesson ideas in the final days before Winter Break, and has lots of great links to different “year in review” features around the Web.

And, if you need even more ideas, you can see my own Learning Network post from last May. It’s filled with end-of-school-year activities that are easily adaptable to December.

The Top Ten Everything for 2013 is from TIME.

Powerful Photos of 2013 is from The Roosevelts.

The Year In Photos From The Atlantic.

Google has come out with their annual multimedia Google Zeitgeist filled with charts, trends and videos documenting the past year.

From The Boston Globe:

Year in Review: Great Stories of 2013 is a great collection from The Washington Post.

2013: the year in world news is an interactive from The Telegraph.

Interactive timeline: 2013 in review is from Al Jazeera.

‘Viral’ News In Review is an interactive from The Guardian.

2013: The year in graphics is from The Washington Post (this annual feature is always excellent).

Most Read Stories of the Year is an interactive from The Wall Street Journal.

2013: The Year in Interactive Storytelling is from The New York Times.

“The Waiting Game” Simulates The Challenges Facing Someone Seeking Asylum In The U.S.

Has ICE No Shame? Undocumented Immigrants Who Volunteered To Care For Children In Custody Arrested