The Best Resources On The Sandy Hook Tragedy 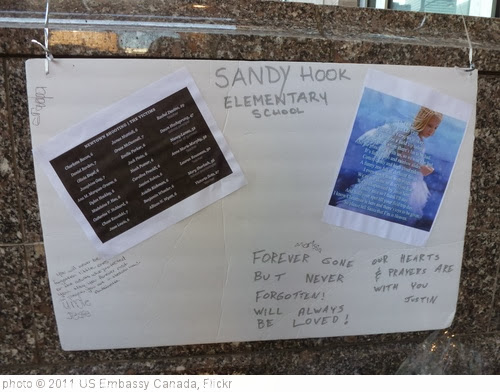 Saturday is the one-year anniversary of the terrible shootings at Sandy Hook school. And, of course, there was another in Colorado.

Here are some useful resources:

Alexander Russo has a good collection of anniversary coverage.

Newtown: One Year Later is a Mother Jones special feature.

“Sandy Hook Promise Launches ‘Parent Together’ As Tragedy’s One Year Mark Approaches” is from my other blog, Engaging Parents In School.

Quote Of The Day: “A Sandy Hook Parent’s Letter to Teachers”

Visit NBCNews.com for breaking news, world news, and news about the economy

Here’s a new video ad on gun violence at schools. You can read more about it at The Atlantic, and here’s the YouTube description:

December 14, 2013, will mark the one-year anniversary of the tragic shooting at Sandy Hook Elementary. Moms Demand Action for Gun Sense in America is partnering with Mayors Against Illegal Guns to commemorate the anniversary with No More Silence, a campaign to honor the victims and show our resolve never to be silent again about gun violence.

Honor the one year anniversary of the tragedy at #SandyHook by visiting this memorial page: http://t.co/YT9af70EEC

Newtown a year later: Nation reflects on legacy of its 2nd-deadliest mass shooting is from CNN.

The Best Resources For Learning About The Maya