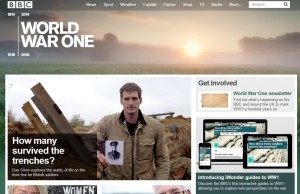 We’re approaching the one-hundredth anniversary of the beginning of World War I, and lots of related online resources are being unveiled.

The BBC has just launched an exhaustive interactive site on the War, which they call the first in a new way they say they plan to rebrand all their content. The new brand is called iWonder, and their World War One iWonder Guide has just about anything you want to know and is presented in an interactive and accessible format. It even appears that all the video can be seen by viewers in the U.S., which is a surprise since often BBC video is blocked here.

I’m adding this resource to The Best Resources For Learning About World War I.

While I’m at it, I’m also making these new additions to that list:

The World War I Museum has a useful interactive timeline.

Lions and donkeys: 10 big myths about World War One debunked is from The BBC.

First world war: 15 legacies still with us today is from The Guardian.