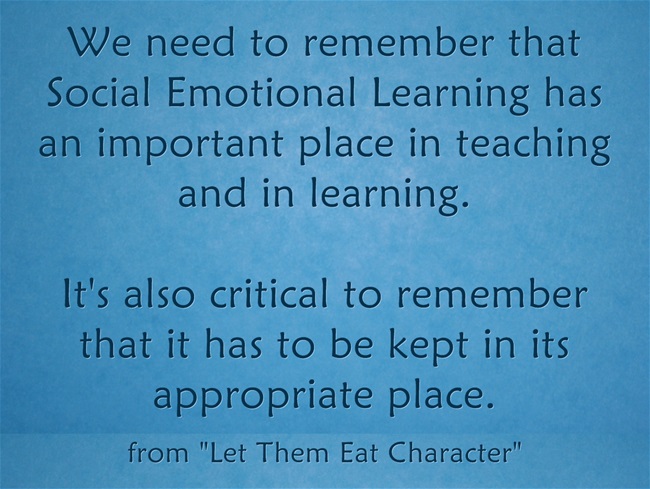 I am a big supporter of educators helping students develop many of the qualities highlighted in the concept of Social Emotional Learning (SEL) — perseverance (or “grit”); self-control; personal responsibility, etc.   I apply it regularly in my classroom, write in my blog about practical ideas on implementing SEL lessons in schools, and have even authored two books on the topic (and will have a third one published next year).

At the same time, I am concerned that many proponents of Social Emotional Learning might not be aware of the increasing danger to SEL of being “co-opted” by well-heeled and well-known groups and individuals, ranging from “school reformers” to columnists like The New York Times’ David Brooks,  and converted into a “Let Them Eat Character” political strategy.   I fear those “Blame The Victim” efforts may  be used to distract from the importance of supplying needed financial resources to schools, providing  increased support to families by dealing with growing income and wealth inequality, and developing a comprehensive anti-poverty strategy.

Already, “school reformers” in Los Angeles are using SEL terms (they even call their report, True Grit) to justify pushing performance pay for teachers and rewards for students, as well as advocating for an increased emphasis on being data-driven (instead of being data-informed) through the use of  “dynamic data.”   KIPP schools have begun the destructive strategy of grading character traits.  And, in a column last month, David Brooks proclaimed that Social Emotional Learning and training “average” parents to become better ones  will take care of everything.

Recent research reveals the toll that poverty takes on one’s ability to execute SEL skills.  People aren’t poor because they don’t have self-control or grit — poverty itself helps create a lack of those qualities.  The cognitive “bandwidth” required to deal with financial problems,  stress  and constant “trade-offs” (a healthy food for the family tonight or new school clothes) makes it more difficult to maintain the mental reserve needed for those SEL skills.

None of these concerns, however, mean that we shouldn’t help our students develop these SEL skills in ways that are healthy for them, for their families, for us and for our schools.   For example, in addition to the many related lessons I teach now,  my colleagues and I are developing  lessons that would help students become aware of some of that research explaining why they might be experiencing some of their self-control and perseverance challenges.  All too often, students tell me that they want to make changes in how they behave, and don’t know why they do some of the unhelpful things they do.  Of course, some of that confusion can probably be attributed to common adolescent challenges.    But just-announced research findings for college students show that discussing these types of social and economic class issues resulted in dramatically increased academic achievement.   Even though that study did focus on college students, there’s no reason to believe an effort with younger students would not meet similar success.

What these concerns do mean, though, is that we should be vigilant about who is doing what and why they are doing it in the name of Social Emotional Learning.   In my teacher advice column at Education Week Teacher, I recently published a chart using Google’s Ngram Viewer.  It searched all indexed books to identify how often the phrase “teaching character” was used since 1840.  The two peak years that phrase was used most often were at the depths of the Great Depression and our more recent Great Recession.   It could go without saying that “teaching character” is a less monetarily expensive strategy to responding (or, to pretend to be responding) to economic crises than other potential solutions.

All this also reminds us, yet again, that, though we teachers can have an important impact on our students’ lives, as all the research shows, we can only impact between ten and thirty percent of the factors that influence their academic achievement.  In addition to everything we do in the classroom on SEL and non-SEL skills, parent engagement is another important strategy to pursue to potentially affect some of those other influencing factors (for those interested, the St. Paul Federation of Teachers  offers one exceptional model on how to do it).

We need to remember that Social Emotional Learning has an important place in teaching and in learning.

It’s also critical to remember that it has to be kept in its appropriate place.

Best Lists Of The Week: College

“What Really Happens When We Pay People for Test Scores?”