The Best Resources On The Protests (& Crisis) In Ukraine 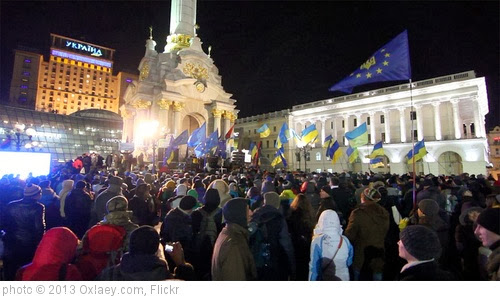 Update from The New York Times: Ukraine Leader Says Tentative Accord Reached With Protesters and Kiev Has Deal, but Both Russia and Protesters Appear Wary

I’ve previously posted about the Ukraine protests, but the escalation of the violence is so tragic and on-going, I thought a “Best” lists would be useful.

Kiev Truce Shattered, Dozens Killed is a photo gallery from The Atlantic.

Ukraine’s deepening political crisis is an infographic from The Washington Post.

Here’s a video from The New York Times:

Ukraine protests: Before and after photos from Kiev’s battle zone is from ABC in Australia.

A divided Ukraine is a CNN interactive.

Here’s an updated page from The New York Times

Who’s who in Ukraine’s political crisis is a CBC interactive.

And here’s more from The NY Times.

Ukraine’s President Voted Out, Flees Kiev is a photo gallery from The Atlantic.

Here’s how the New York Times describes this video:

[It mixes] footage of the demonstrators with inspirational speeches on the importance of overcoming fear first spoken by Will Smith, in “After Earth,” and Sylvester Stallone, in “Rocky Balboa.” It was shared at the height of last week’s violence by Pavel Durov, the founder of the most prominent Russian social network, VKontakte.

Ukraine protests: the roots of the political division is an interactive from The Guardian.

Ukraine in Maps is an interactive from The New York Times.

Tensions escalate in Ukraine (2nd March, 2014) is a lesson from Breaking News English.

Here are a couple of NY Times videos:

Covering the Russian Army in Crimea is a photo gallery from The New York Times.

Ukraine crisis: the military imbalance is an interactive from The Guardian.

Military movements in Crimea is an infographic from The Washington Post.

CNN has many multimedia resources.

Putin’s Playbook: The Strategy Behind Russia’s Takeover of Crimea is from The Atlantic.

Ukraine embroiled in East-West divide is an Associated Press interactive.

Ukrainian crisis: Situation maps is from The Washington Post.

What’s Going On in Ukraine? An Up-to-Date Guide is from ABC News.

Teaching with the News: Ukraine, Russia and Crimea is by Diana Laufenberg.

Breaking Away is a useful map from The Wall Street Journal.

News and teaching resources round up on the Ukraine crisis is from The Guardian.

Russia’s Goal In Ukraine: Three Scenarios is from NPR.

Crimea and the Hysteria of History is from The New Yorker.

‘Believed to Be Russian Soldiers’ is a photo gallery from The Atlantic.

Thousands March in Moscow to Protest Crimea Vote is from NBC News.

Crimea crisis: Explore the flashpoints is a CNN interactive.

Crisis in the Crimea: The Showdown Between Ukraine and Russia is a GREAT interactive from Smithsonian Magazine.

The U.S. has treated Russia like a loser since the end of the Cold War is a very interesting piece from the former ambassador to the USSR.

Former U.S. Ambassador to USSR: Let Russia Take Crimea is a shorter piece from the same diplomat, and appeared in TIME.

A Ukraine Without Crimea is an infographic from The Washington Post.