This Looks Interesting, Though I Have Some Concerns: Angela Duckworth Creates “Grit” Organization 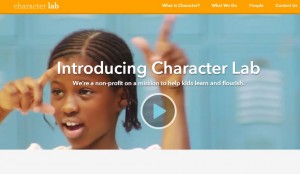 Thanks to Alexander Russo, I just learned about an interview with “grit” researcher Angela Duckworth at Scholastic.

The interview is fine, though most of it won’t be new to people familiar with her work or the info at The Best Resources For Learning About The Importance Of “Grit.”….

Except, however, for the news that she’s begun her own non-profit organization called Character Lab.

It sounds like they are doing some potentially very useful research, which they say they will report on over the summer.

However, the group also offers a free “character report card” for download, which is very, very concerning to me (see my Washington Post piece, Why schools should not grade character traits). In addition, some of the members of the group’s board make me nervous because of their “school reform” background.

As I’ve previously written, many “school reformers” have a tendency to manipulate potentially good ideas and crush the life out of them. And there seems to be a concerted effort by some of them to do just that with Social Emotional Learning (see Let Them Eat Character).

My impression in the past has been that Professor Duckworth has not had those kinds of views.

I hope that still remains the case….

In case you’re interested, here’s a video from Character Lab:

Tons Of Resources On Both The Milgram & Stanford Prison Experiments

The Best Resources On The Idea Of “Wait Time”