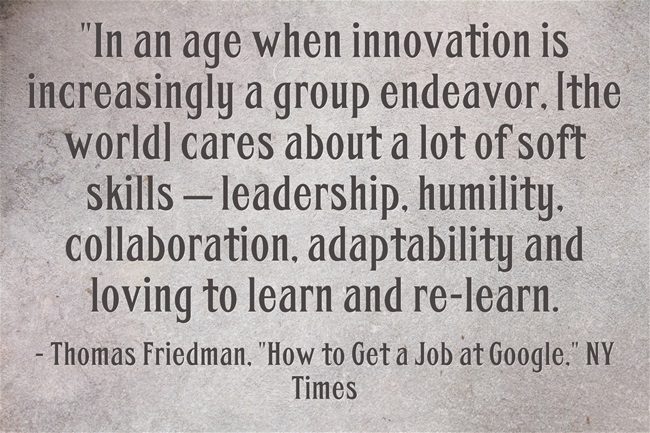 New York Times opinion writer Thomas Friedman is generally as incoherent as most of The Times’ editorial writers when it comes to education-related issues. However, he wrote a very good piece in October (see Stop The Presses! Thomas Friedman Actually Writes Something Semi-Coherent About Education) and, today, he’s done it again.

His column today is basically an interview with the head of hiring for Google, who highlights what they’re looking for in potential employees:

* “What we care about is, when faced with a problem and you’re a member of a team, do you, at the appropriate time, step in and lead. And just as critically, do you step back and stop leading, do you let someone else? Because what’s critical to be an effective leader in this environment is you have to be willing to relinquish power.”

* Humility and ownership. “It’s feeling the sense of responsibility, the sense of ownership, to step in,” he said, to try to solve any problem — and the humility to step back and embrace the better ideas of others. “Your end goal,” explained Bock, “is what can we do together to problem-solve. I’ve contributed my piece, and then I step back.”

There’s a lot more there, but it’s pretty clear Google is not looking for anything measured by standardized test results. (Note, based on the Facebook discussion I linked to at the top with Robert Pondoscio, I might rephrase that previous slightly. Even though the head of hiring at Google does call test scores “worthless” in Friedman’s interview, I’d now probably insert the word “primarily” after “measured”).

I wonder if Friedman will make that connection the next time he decries how low U.S. students are doing on international test scores? I tend to doubt it, since he didn’t recognize the irony in his October column of traveling with the head of Teacher For America while praising the importance of extensive teacher training.

I think today’s column will be useful to use with students, and I’m adding this info to:

“Skype In The Classroom” Launches

My Best Posts Over The Years — Volume One