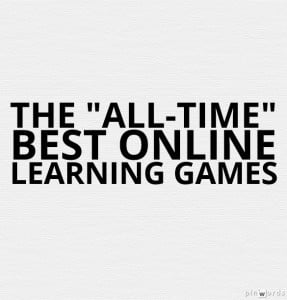 I’ve been posting annual lists of the The Best Online Learning Games for a number of years.

I thought it would be useful for readers, my students, and me to review them all and identify my choices for the “all-time” best ones.

Look for quite a few more “All-Time” Best lists over the next couple of months.

There are over 1,200 Best lists now that are categorized and updated regularly.  You can see them all here.

Here are my choices for The “All-Time” Best Online Learning Games (let me know which ones I’m missing — I’ll also be adding to this list after I do a complete review of games I’ve published on this blog. Also, these are not listed in any order of preference):

Mission US, which is funded by the Corporation For Public Broadcasting and the National Endowment For The Humanities, has U.S. History-related “Choose Your Own Adventure” games ranging from great to terrible.

VocabularySpelling City is already on several of my “The Best…” lists for learning games.  Its title speaks for itself.

Jeopardy Labs lets teachers and students create their own online games of Jeopardy. No registration is required, and each game has its own unique url address. Most other apps to create Jeopardy games require a software download, which makes Jeopardy Labs really stand-out since none is required.

Headline Clues from Michigan State University  is a great idea that can be adapted for using in the classroom with paper and pen. In the game, you’re shown the lead paragraph, but letters from two words in the headline are missing. Players have to use clues in the first paragraph to identify what the missing words should be. As you play the online version, you can ask for clues. One of the great things about using this game in the classroom is that students can create their own and have classmates trying to figure out the answers, as well as giving them clues if needed.

What 2 Learn  has a variety of templates, and a fairly easy process, that teachers and students can use to create and play learning games.

Questionaut is an online video game from the BBC where players have to answer questions related to English, Science and Math. As you answer the questions correctly, a little “questionaut” in a balloon gets to continue on his journey.

Two older music games by the same creator — Luke Whittaker are personal favorites.  One is called Sound Factory  and the other is A Break In The Road. I’m not going to even going to try to describe these wonderful games here.  You can read my post and try them yourself.

Of course, I have to include the famous Free Rice game.  It’s great that they donate rice to the United Nations food program for every correct answer, but that’s not why it made my list.  It’s here because it’s a neat vocabulary-building exercise for anyone.  It stands-out becauses it only increases its difficulty level based on how well you’re doing in the game.

Launchball is from the British Science Musuem.  Students can create a sort of video game (and learn scientific concepts in the process), title it, and post the url.

Quizalize recently announced a new feature that I think deals with that problem — now students are automatically grouped in teams and the teams compete against each other, plus students see how their teams are doing. This is how I typically organizing learning games in the classroom, and I think it’s simple, yet ingenious, that Quizalize figured out how to do it automatically online.

I’m now adding both Quizizz and Quizalize to this list.

It’s A Miracle! Kahoot Now Can Show Questions On The Same Screen As The Answers