Getty Images Has Just Become The Number One Source For Images In Social Media — Choose From 40 MILLION!

Getty Images has just unveiled an embed feature for 40 million of their photos, making them available for non-commercial use.

However, that’s less than a third of the photos on their site, so after searching with a keyword, you have to look for photos that have the embed symbol (circled) on the bottom right, as in the screenshot below: 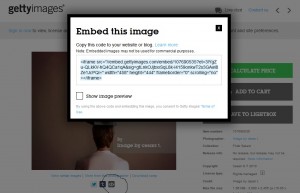 I don’t see how you can resize the images (though perhaps someone can tell me how that is possible) but, if so, you can’t have everything 🙂

The image at the top of this post is an example of how a Getty Image looks when it’s embedded.

Of course, I’m adding this info to The Best Online Sources For Images.

You can learn more about this new Getty feature at TechCrunch and at The Verge.

Thanks to Yoni Appelbaum for the original tip.

NOTE: Getty embedded images do show-up in an RSS feed. However, they apparently are not “Pinnable” on Pinterest.

Jotpress Is Easy To Use, But…

“All 23 of the “Interesting Ways” presentations in one place”