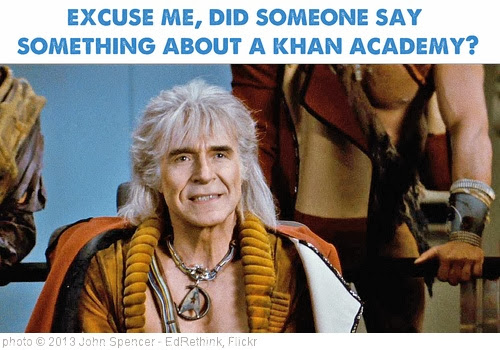 I’ve previously shared info on the SAT changes that were announced yesterday (see “The Story Behind the SAT Overhaul”).

I had seen that one of the parts of the announcement was that the Khan Academy was going to work with the College Board to develop free online test prep materials, and assumed it was only going to be for math.

However, I know see in a very good Ed Week story on the program that it’s also going to include prep for the reading and writing part of the test.

I’ve shared a lot about the Khan Academy (see The Best Posts About The Khan Academy). I’m certainly no expert on math, but one thing I can say with certainty is that they’ve had some just awful attempts at branching out to other subjects (see This Khan Academy History Video Is Just Awful).

Here’s an excerpt from the Ed Week article that shows, at least when it comes to this subject, David Colemen from the College Board is a master of the understatement:

During a media briefing with reporters, Sal Khan and Coleman acknowledged that providing online preparation materials for math – where “productive practice” of discrete skills can lead to rapid learning gains – will be easier than for reading or writing.

“This will take some work,” Coleman said.

I will work at maintaining an open mind about what they might develop but, I’ve got to admit, I’m skeptical….