“The Story Behind the SAT Overhaul”

The Story Behind the SAT Overhaul is a very interesting piece in this week’s New York Times Magazine.

Still, Coleman concedes that the redesigned SAT won’t quiet everyone’s complaints, and he doesn’t expect there to be a universal celebration of what they’ve done. You can imagine there will be substantial questions, for instance, about whether any standardized test can be fair across all groups, and whether the College Board is not ultimately creating a new test that somehow, some way, will be gamed as much as the old one.

Coleman’s response to those concerns is to say that the new, more transparent test will be tied to what’s being taught in high school and will be evidence-based. But his previous work on the Common Core has raised some educators’ concerns. “Dave Coleman is not an educator by training,” says Lucy Calkins, the founding director of the Reading and Writing Project at Columbia University’s Teachers College and an author of “Pathways to the Common Core.” Calkins has been a strong defender of the Common Core but thinks Coleman has been too insistent on his own particular method for implementing its standards. She cites a video that Coleman helped create of a “model lesson” for teaching the Gettysburg Address, where he would have students spending several classes “parsing the meaning of each word in each paragraph,” she said. She doesn’t feel there’s evidence that this method works.

With a redesigned SAT, Calkins thinks that too much of the nation’s education curriculum and assessment may rest in one person’s hands. “The issue is: Are we in a place to let Dave Coleman control the entire K-to-12 curriculum?” 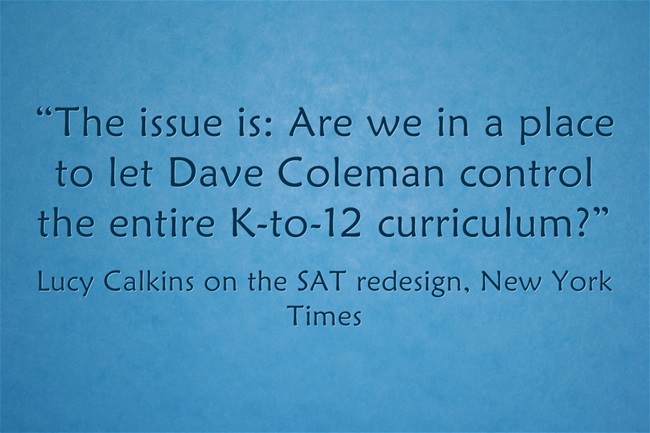 Here are some other particularly useful articles on the SAT redesign:

The College Board is giving away test prep for free. Why that won’t change much. is from The Washington Post.

SAT to drop essay requirement and return to top score of 1600 in redesign of admission test is also from The Washington Post.

College Board Outlines SAT Redesign It Says Will Be More ‘Focused and Useful’ is from Ed Week.