This Has Me Concerned: “Study Links Teacher ‘Grit’ with Effectiveness, Retention” 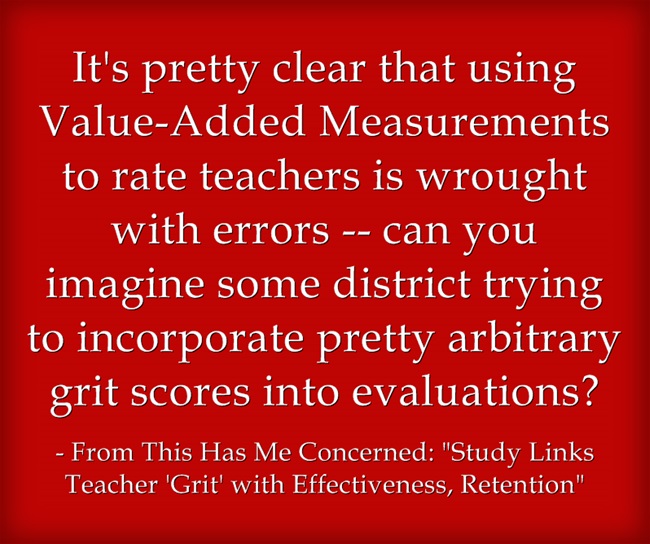 My Washington Post piece had only referred to SEL and students — I’m embarrassed to say I hadn’t even thought about how it could be misused against teachers.

Here’s what the study found:

novice teachers in high-poverty school districts, higher levels of “perseverance and passion for long-term goals” (aka “grit”) were associated with higher rates of effectiveness and retention.

Come on, now. It’s pretty clear that using Value-Added Measurements to rate teachers is wrought with errors — can you imagine some district trying to incorporate pretty arbitrary grit scores into evaluations?

I met with a staffperson from Angela Duckworth’s new Character Lab on Friday. I shared with her, as I’ve written before, that I strongly believe that these kinds of character assessments can be useful for self-assessment purposes, with the clear explanation that they might or might not be accurate. In fact, I have students take Professor Duckworth’s online “grit assessment” — but only after I caution that it might or might be accurate, they should take it with a grain of salt, not share it, and only use it if it meshes with their own self-assessment.

Once you start using this kind of data to judge others, you fall into the trap of being data-driven instead of being data-informed.

I’ll end with a quote that is often erroneously attributed to Albert Einstein when, in fact, it was said by sociologist William Bruce Cameron. That doesn’t detract from its wisdom: