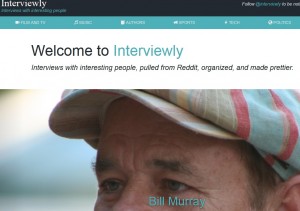 The Reddit website has great “Ask Me Anything (AMA)” interviews with well-known people, and I’ve posted about some of them. The content is fascinating. However, it’s almost like they had a contest for who could create the most unattractive and difficult-to-read format, and used the winner’s idea to use as the lay-out for the interviews themselves.

Now, though, Inteviewly has taken some of the best AMA’s and reformatted them into very attractive and accessible designs. They’ve categorized them, too, including a section on authors. These include ones with R.L. Stine and Judy Blume. Those could be read by students in their entirety, or teachers can excerpt parts as Read Alouds.

I’m assuming the people behind Interviewly have negotiated copyright issues with Reddit. If not, the site might not be up for long…