Will It Ever Be Possible For A Teacher To Trust Bill Gates?

I posted Gates Foundation Makes Its Move In California — And It Looks Like Somebody Is Giving Them Good Advice a couple of months ago, and I still believe what I wrote.

However, I’ve just got to say that every time Bill Gates speaks in public, he makes me question whether I should….

Rolling Stone just published an interview with him. 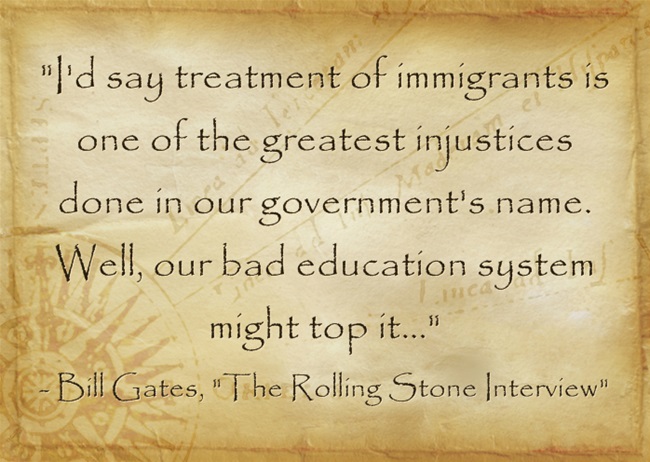 Come on, Bill. Perhaps you should read The Best Articles Pointing Out That Our Schools Are Not Failing.

Do many of our schools face lots of challenges? Yes. But we’re doing a pretty good job and, as all research points out, many of our challenges relate to issues outside the schoolhouse walls. That doesn’t mean we can’t do better, but it seems to me a slap in the face to teachers when you make a blanket statement like that…

I thought it was interesting that his interview came on the heels of his appeal to teachers to help defend the Common Core Standards — where he says that there is no voice “more important or trusted” than teachers.

I hope, as his Foundation sort of been saying in their pivoting (which I wrote about in the first link at the top of this post), that this idea of no voice being more important or trusted than teachers will hold true in future Gates Foundation funding decisions — and not just when they want to get educators to support something the foundation has dreamed up on its own and had decided to push.

Here are some quotes from that piece — see if you see any similarities to what’s happening in schools:

“For better or worse,” said Steven A. Edwards, a policy analyst at the American Association for the Advancement of Science, “the practice of science in the 21st century is becoming shaped less by national priorities or by peer-review groups and more by the particular preferences of individuals with huge amounts of money.”

….Yet that personal setting of priorities is precisely what troubles some in the science establishment. Many of the patrons, they say, are ignoring basic research…

Fundamentally at stake, the critics say, is the social contract that cultivates science for the common good…

The Best Posts About Trust & Education