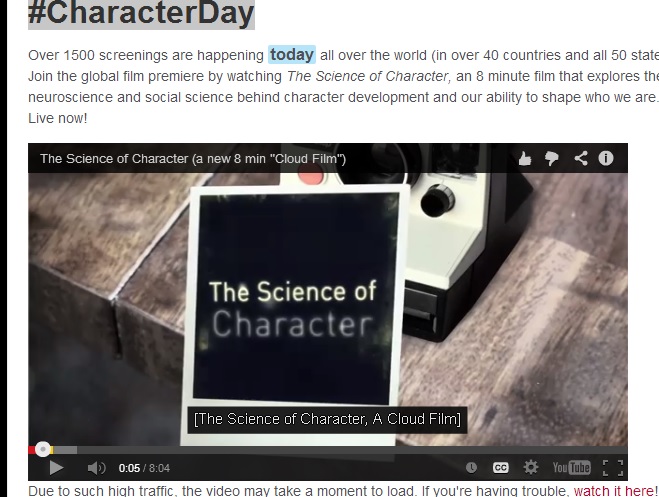 Apparently, today is “Character Day” — whatever that means.

I believe (though may be wrong) that the film-maker behind the eight-minute video I’ve embedded below, came up with the idea and unveiled her film today. It’s called “The Science Of Character” and seems like a nice enough video — I could see presenting it as an introduction to a Social Emotional Learning lesson (see The Best Social Emotional Learning (SEL) Resources). The film’s home site offers a number of related teaching resources.

Personally, though, I’m much more enthusiastic about the resources and ideas put together by Facing History at 8 Multimedia Resources to Study the Science of Character on #CharacterDay.

As regular readers know, however, I’m becoming increasingly concerned about how the idea of teaching “character” is being “vanilla-ized” and/or manipulated towards inappropriate ends. You can see more of my thoughts in my Washington Post piece, The manipulation of Social Emotional Learning and in a recent blog post here titled This Has Me Concerned: “Study Links Teacher ‘Grit’ with Effectiveness, Retention.”

Nevertheless, I think it is possible to teach character in effective and appropriate ways. In fact, I’ve published two multi-part series on the topic at my Education Week Teacher column — last year and this year.

Quote Of The Day: “Your Thoughts Can Release Abilities Beyond Normal Limits”

“The Problem With Goal-Setting”