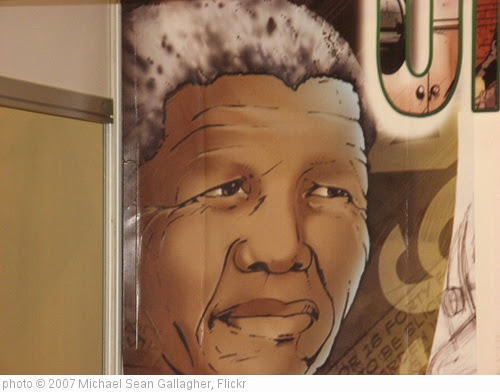 I have lots of useful resources at My Best Posts On Writing Instruction, and it’s also the place I collect posts about the writing prompts I use in my various classes.

Here’s one I’m using in my class right now. We’re ending a unit on Nelson Mandela, but it can be used in other contexts, too.

I can’t take credit for it, though. It was developed by my colleagues Lara Hoekstra, Katie Hull, and Cary Zierenberg, and I have permission to share it here. I’ve modified the process somewhat, though.

First, I ask students to take a minute and write down what they think the word “reconciliation” means. Students come up with some fairly logical guesses, but generally no one has heard of it before that day. I generally bring up two students to the front, tell them to fake like they are fighting each other, and then have them shake hands.

Then, I introduce the the short essay, The Cycle of Revenge Can Be Broken, by Mark Mathabane. As usual, I quickly introduce the essay and almost immediately go to the writing prompt:

How does Mark Mathabane believe hatred can be overcome? To what extent do you agree or disagree with what he believes? Write an essay responding to these questions; to develop your essay, be sure to include specific examples drawn from your own experience, your observation of others, or any of your reading — including “They Cycle Of Revenge Can Be Broken” itself.

We go through our typical process of breaking down the prompt — underlining the tasks the prompt is asking you to do, and then quickly converting it into a simple graphic organizer using the “They Say, I Say, Why I Say It” framework.

California Writing Project member Jessica Mann came up with the idea of having students listen to some Storycorps recordings related to reconciliation and then have students reflect on them so they might have more grist to use in their response to the prompt. I played a few recordings; after each one, I had students answer if they thought reconciliation had been achieved — if so, how and, if not, why? Students first did a pair share, followed by a quick class discussion.

I also slightly modified an exercise developed by my colleague Lara Hoekstra, and gave people a sheet listing seven words/quotes, and had them write for a minute or two on each one:

3. The worst thing someone ever did to me was…

4. “I do not even hate the Talib who shot me. Even if there was a gun in my hand and he stands in front of me, I would not shoot him.” — Malala Yousafzai

6. We should treat our enemies….

We then began watching Mandela:Long Walk To Freedom, which just came out on Netflix. We’ve been studying Mandela for six weeks, so it functions as a review and the last third highlights the idea of reconciliation. We’re going to watch Invictus, which starts where the “Long Walk” ends, though we’ll probably only watch the first part before students start writing their essay. During the movie, students are taking notes in their outline to help them write their essay.

We began yesterday — Monday — and essays will be due at the beginning of class next Monday.

It’s gone well in the past, and I suspect it will go well now.

Feedback, particularly suggestions on how to make it better, are welcome.