It’s been a rather long week — I always know I teach at a 100% free breakfast and lunch comprehensive high schools, but there are some weeks I really know it. This was one of those latter weeks, with many challenges facing our students coming to the forefront. One pleasant thought I had though, after our staff meeting was this one: At least this year, most of our students here in California don’t have to take standardized tests this year!

And this is one of the first tweets I see when I get home:

MT @gatesfoundation: What do the Teenage Mutant Ninja Turtles have to do with student test-taking? Must-read: http://t.co/OdXGL3puOi

Here’s what I “tweeted-out,” along with one particular response:

Oh,God,this is truly awful RT @gatesed: What do the Teenage Mutant Ninja Turtles have to do with student test-taking? http://t.co/lFX7l2UkQf

Here’s how the article (a newspaper column written by a charter school operator) Gates said was a “must-read” begins:

With the New York State English Language Arts exam this week, there have been stories galore about how a growing group of parents, concerned about the pressures of the state tests, are opting their children out from taking them.

At our 18 Brooklyn elementary and middle schools, we see this week differently. We see the state exams as a perfect opportunity for our teachers and leaders to create the wackiest and most joyful ways to pump up our 5,000 students as they gear up to show what they know.

In the days before this week’s test, teachers created motivational themes based on popular movies and TV shows focused on making kids laugh and inspiring them to do their best.

So rather than just see themselves as test-takers, our students became X-Men and Teenage Mutant Ninja Turtles fighting off villains who try to steal their knowledge. The students had to decipher sinister messages from Voldemort, who tried to challenge their reading comprehension skills. By being exemplary readers and writers, they won the freedom of beloved teachers who were threatened by the likes of Darth Vader and Captain Hook.

Listen, I’m not opposed to a little test prep — it we gotta’ give these standardized tests sure, let’s spend a few days on preparing (see The Best Posts On How To Prepare For Standardized Tests (And Why They’re Bad) and Ethical & Effective Test Prep).

I’m all for celebration. But don’t we have many more opportunities to do so that teach far more valuable lessons than focusing on standardized test results? 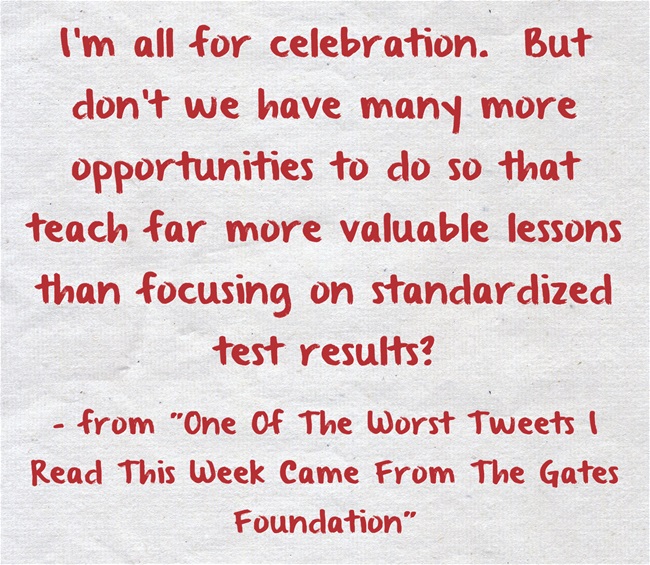 “Is Developing Race-Specific Parent Groups Really The Way To Go?”