There are just so many good infographics and interactives out there that I’ve begun a new semi-regular feature called “Infographics & Interactives Galore.”

You can see others at A Collection Of “The Best…” Lists On Infographics and by searching “infographics” on this blog.

I’ll still be publishing separate posts to individually highlight especially useful infographics and interactives, but you’ll find others in this regular feature.

Ypres in the first world war … and now – interactive is the first in a series of World War One features from The Guardian. I’m adding it to The Best Resources For Learning About World War I.

The GOOD 100 is sort of a cross between a listing of 100 people doing good work around the world with a quiz to determine your aptitude/interesting into doing something similar. I think it’s a little strange, but interesting.

150 Years Of Travel is another slightly strange, but interesting, interactive. I’m adding it to The Best Sites Showing The Most Popular Tourist Destinations In The World.

Borderland is an interactive from NPR about the Mexico/United States border. I’m adding it to The Best Sites For Learning About Mexico, Central & South America.

diversitydatakids.org lets you get lots and lots of demographic data. I’ll let this post explain it all.

I learned about Visage, a new tool for creating infographics, from The Why Axis. They won’t be unveiling their self-service site for a few months, it looks like it might have some potential. Here’s a video about it:

I’m tentatively adding it to The Best Resources For Creating Infographics.

This infographic shows the effect war is having on children around the world: 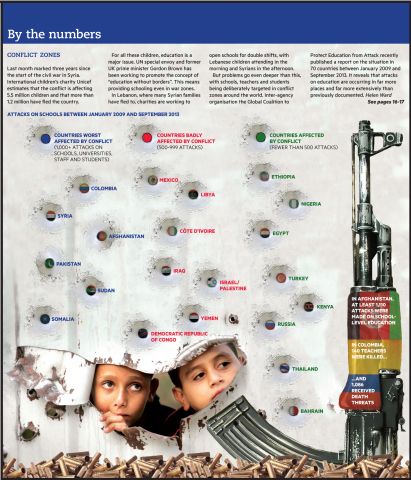 June’s Infographics Of The Week — Part One