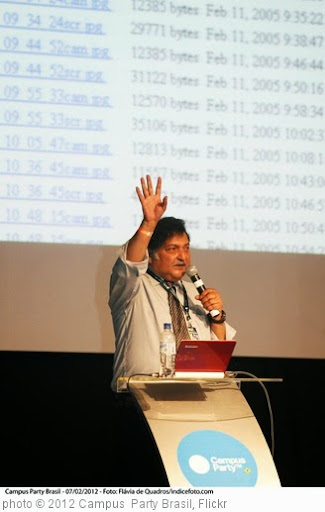 Professor Sugata Mitra and is famous for his “holes in the wall” experiments where he placed computers in impoverished Indian communities and students “self-organized” their instruction. Professor Mitra was awarded the TED Prize last year, and expanded his work with that support.

The first post was one where I shared a number of concerns I had about his work (see Questions About Sugata Mitra & His “Holes In The Wall”) and then a guest post in response from Rory Gallagher. Both attracted many comments — particularly Rory’s — and Sugata Mitra also participated in the comment thread. You can find his TED video on the first one.

The third one was I’m Not Sure How Effective It Will Be, But Sugata Mitra’s New Online Tool Definitely Looks Interesting. It’s about his recently unveiled efforts to extend his ideas further.

A few days ago, he spoke at the International IATEFL Conference to ESL/ELT/EFL teachers. Here’s the video of his speech:

Here’s a follow-up interview he gave to conference organizers.

He received a decidedly mixed response, which you can read about in How Sugata Mitra Annoyed English Teachers (& why I care) at 16 Kinds.

Sugata Mitra: The Ignorant School Teacher? is by David Deubelbeiss.

Marisa Constantinides has collected a number of posts about Sugata Mitra’s recent address to ESL teachers.

#ELTchat summary on Sugata Mitra and 25 Questions He Needs To Answer is from The Teacher James.

Lizzie Pinard recounts a question/answer session with Sugatra Mitra at a recent language conference in this post.

Sugata Mitra and the Hole in the Research is by Tom Bennett.

The first School in the Cloud learning lab in the United States opens in Harlem is from TED Talks.

In This Classroom, Knowledge Is Overrated is from Wired.

I’d be interested in making additions to this list, so please contribute them in the comments section.

The Best Sites To Learn About Georgia’s Floods

Nothing New In New “Top 20 Principles from Psychology for Teaching,” But Still Very Useful