I’m a big fan of Professor Adam Grant’s work (see my interview with him at Education Week, Teachers As “Givers, Takers & Matchers”: An Interview With Adam Grant).

And I was very excited to see his must-read guest column in The New York Times today, Raising a Moral Child.

It’s geared towards parents, but just about everything he says is also extraordinarily useful to teachers, too.

Developing these kinds of qualities are being identified more and more as an important part of our work as educators (see my Ed Week series, ‘Character Is Not Compliance Out Of Fear,‘ and The Best Social Emotional Learning (SEL) Resources).

There’s so much substance in his short column that I’m not even going to try to summarize it — just read the whole thing.

I do, however, want to highlight one part of it where I think he just made our job more complicated (obviously, I’m talking tongue-in-cheek): 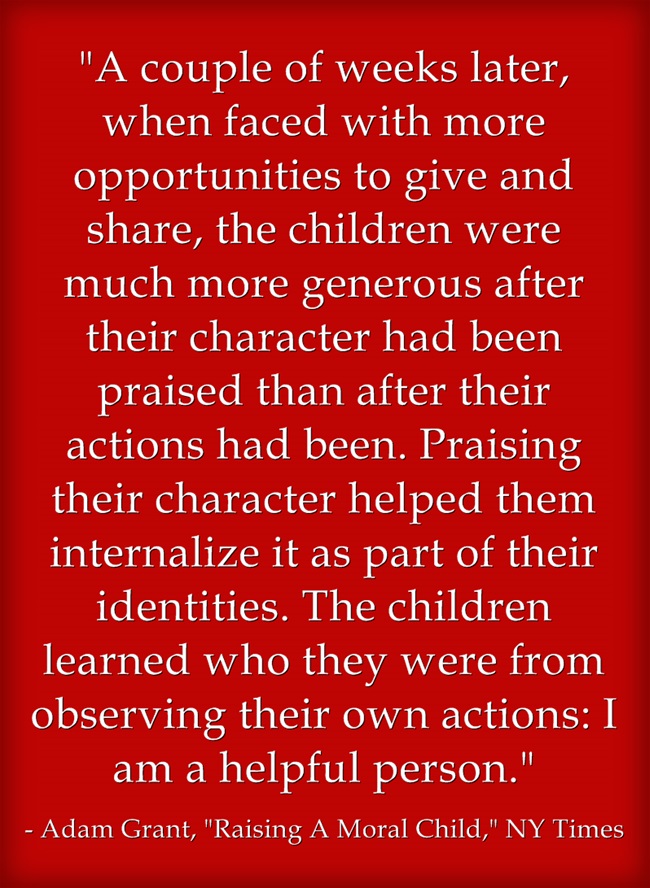 Many of us who are familiar with Carol Dweck’s work on praising action instead of intelligence might find a contradiction in this finding.

I know I was a bit confused.

So I sent an email to Adam asking about this apparent contradiction and he was kind enough to respond right away. Here’s what he said:

In “Mindset”, Carol Dweck describes her famous body of groundbreaking research demonstrating that when we praise children for their intelligence, they develop a fixed view of ability, which leads them to give up in the face of failure. Instead of telling them how smart they are, it’s wise to praise their effort, which encourages them to see their abilities as malleable and persist to overcome obstacles. Some parents and teachers have stretched this idea to its logical conclusion: always praise actions, not fixed qualities. In the domain of moral character, though, this might be the wrong approach. If we want children to become caring and generous, the evidence suggests that there’s value in helping them see these as stable dimensions of their identities.

That said, even in the moral domain, there may be some risks of praising character. Research on moral licensing suggests that when we see ourselves as good people, we sometimes feel greater freedom to engage in unethical behaviors. This is captured in chilling detail in Mistakes Were Made, But Not By Me by Carol Tavris and Elliot Aronson, and in The Honest Truth about Dishonesty by Dan Ariely. I’d love to see more research on how to instill a sense of moral character without leading people to say, “I’m a good person, so I can do a bad thing”—or worse yet, “I’m a good person, so this clearly isn’t a bad thing.”

So, now, based on this research, we might need to be aware of which character quality we want to teach and employ contradictory instructional strategies for some of them.

Teaching is complicated, ain’t it?

My Co-Author & I Will Be Doing A Free Online Chat About ELL’s On Oct. 11th

My Book On Teaching Engish Language Learners Is Now Available