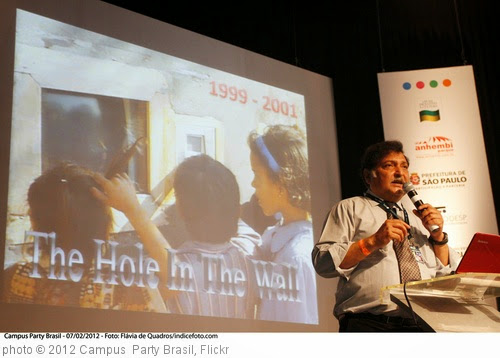 I’ve published a fair number of posts about the work of Sugatra Mitra (see The Best Posts & Videos About Sugata Mitra & His Education Ideas), and he’s participated in the comment discussions.

He recently left a comment on a post I originally wrote three years ago, titled Is This The Most Important Research Study Of The Year? Maybe.

I think the post itself is worth reading, but here’s how I summarized it at the time:

Here was the comment left by Professor Mitra, followed by my response. I’d invited readers to weigh-in, too:

It’s a good study, and you are right to highlight it. However, it assumes that the kind of teacher you need to do the right kind of scaffolding, is available. This (unspoken) assumption is incorrect in most places in the world, including the USA.

If such a teacher is not available, then, clearly, ‘enhanced discovery learning’ is not possible. Under those circumstances we have three choices – use a traditional taught approach if you have that kind of teacher, at least. Or use ‘unassisted discovery learning’ or don’t encourage any kind of learning.

Which one would you choose?

I believe that most teachers, particularly with adequate support and professional development, are fully capable of providing the kind of scaffolding needed to implement “enhanced discovery learning.” I think that’s borne out with the increasing popularly in the U.S. and elsewhere of inductive learning, project-based learning, problem-based learning, and inquiry-driven learning.

In our own comprehensive high school in the inner-city of Sacramento, for example, we have an “enhanced discovery learning” curriculum taught by all of our English and Social Studies teachers.

I agree with the findings of the research discussed in this post. I think the odds of successful learning are much, much higher with guidance from an educator is much, much higher than with a “sink or swim” perspective.

There’s the old story of the father taking his son out to the woods. The father sees a deer first. Instead of pointing it out to his son, he leads his son in the direction so that the son can point the deer out to his father, instead. The excitement and energy the boy generates for himself by this discovery is much more likely to lead to an appetite for learning more than if the father had told him where to look, and the father is there to help the boy discover answers to questions he might have as well as ask the boy questions about what he is seeing (why do you think the deer is here at this time of day?; do you think there are others? why might this deer be alone?). Without his father’s guidance, the boy might, or might not, have seen the deer, and is more likely to be limited to only the questions he can think of himself.

By the way, readers might be interested in reading this recent TED Talk interview with a filmmaker making a movie about Professor Mitra’s work.

“When Students Focus On Tests, They Are Not Taking The Time To Think About Why They Are Learning”