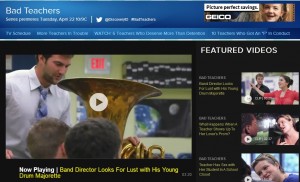 There are some teachers who don’t play by the rules, who ruin lives instead of changing them for the better. They’ll go dangerously beyond the lesson plan to fulfill their youthful fantasies and selfish desires, often dragging students down with them into a WORLD of deceit and danger. The educators exposed in Investigation Discovery’s new, three-part series Bad Teachers had been beloved by students, looked up to by faculty peers, and trusted by parents. Little did anyone know that their extra-curricular activities crossed the line into Twisted chemistry, secret lust, shocking exploitation, and felony seduction. Interviews with former students, loved ones, and law enforcement paint a portrait of teachers who abused their power and found themselves on the wrong side of detention.

Have they no shame?

Instead of a show called Bad Teachers, why not create a series focussed on celebrating good teachers?

Note: I have a The Best Funny Movie/TV Clips Of Bad Teachers, but I use that as an engaging opening to a serious lesson for my students on teaching, and it certainly is done in the spirit of fun.  I also have The Best Places To Learn About (And View Video Clips Of) Teachers In The Movies.

Three New Resources For Planning The First Days Of School

Best Lists Of The Week: Class Blogs, Including Mine

Ways To Connect With “Sister” Classes

The Best Podcasts For ESL/ELL/ELT Teachers