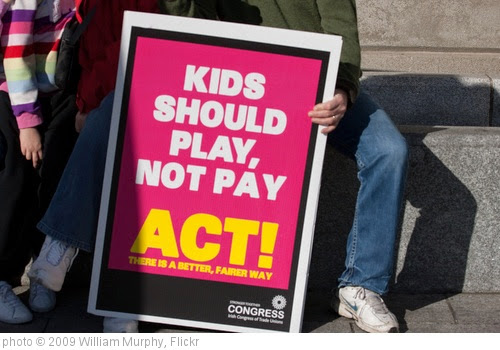 Here are some relatively recent useful posts and articles on educational policy issues:

Jack Schneider has written a good piece titled The High Stakes of Teacher Evaluation. I’m adding it to The Best Resources For Learning About Effective Student & Teacher Assessments.

EPI Stands By the Rigorous Methods and Findings of Its Report on Privately Run Charter Schools and the Rocketship Company is from The Economic Policy Institute. I’m adding it to The Best Posts & Articles Analyzing Charter Schools.

At Success Academy schools, high-octane test prep leaves nothing to chance is from Chalkbeat. I’m adding it to the same list.

Teachers are losing their jobs, but Teach for America’s expanding. What’s wrong with that? is from The Hechinger Report. I’m adding it to The Best Posts & Articles Raising Concerns About Teach For America.

Teachers and Doctors Rated Differently is by Walt Gardner at Ed Week. You might be interested in a number of other posts I’ve written comparing doctors and teachers.

Vergara suit wrong to blame teachers for inequities is by Randi Weingarten. I’m adding it to The Best Resources On California Court Case Attacking Teacher’s Rights.

The New York City teachers union reached what appears to be a landmark contract that also includes a career ladder. Especially because of that last feature, I’m going to include these three pieces about the contract in The Best Posts, Articles & Videos On “Teacher Leadership”:

Pact With New Mayor Would Give N.Y.C. Teachers Raises, Career Ladder is from Ed Week.

A Triumphant Return to Professionalism in New York City is by Diane Ravtich.

Teachers Question Pay-for-Performance Element in Proposed Contract is from The New York Times.

Pearson Wins Major Contract From Common-Core Testing Consortium is from Ed Week. I’m adding it to The Best Resources For Learning About The “Next Generation” Of State Testing.

My Reaction to the PARCC & SBAC Responses is by Rick Hess. I’m adding it to the same list.

The Houston teachers union has sued over the district’s use of Value-Added Measurement in teacher evaluations. You can read about it in Ed Week here and also watch this video of their news conference. I’m adding it to The Best Resources For Learning About The “Value-Added” Approach Towards Teacher Evaluation.

RT @rweingarten: This is how a teacher is evaluated in Houston..Child centric?pic.twitter.com/VMe4PYV9z3

Gates’ $100M Philanthropic Venture inBloom Dies after Parents Say “No Way” is from The Non-Profit Quarterly. Here’s an excerpt:

Nonetheless, finding experienced grantmakers like Gates and Carnegie misreading the interests and desires of the parents and educators who were purportedly the intended beneficiaries is surprising, if not shocking. It’s an unfortunate reflection of the top-down approach of some foundations, issuing prescriptions for the benefit of the public even if that public doesn’t buy in. The inability of many funders to see how counterproductive and unpopular their technocratic solutions are with their intended beneficiaries is a disappointingly pervasive trend in much of big philanthropy

You might also be interested in The Best Posts On The inBloom Data Fiasco. I’m going to add this article, though, to The Best Resources For Learning About The Role Of Private Foundations In Education Policy.

California Districts Seek to Renew NCLB Waiver is from Ed Week. I’m adding it to The Best Posts & Articles On The NCLB Waiver Given To Eight California School Districts.

This Looks Interesting, Though I Have Some Concerns: Angela Duckworth Creates “Grit” Organization

The Eighth Day Of Our Strike Is Nearing Its End – “One Day Longer, One Day Stronger”