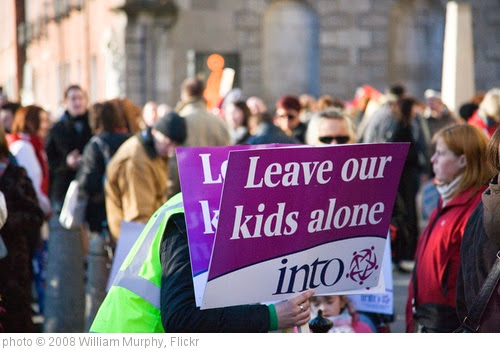 Here are some recent pieces about education policy issues that are worth reading:

Newark’s Voters Choose New Mayor and New Path is from The New York Times. This is great news for teachers, parents and students. I’ve written quite a bit at my Engaging Parents In School blog. about the twilight zone that Newark schools have entered over the past few years.

The Broad Foundation’s Bruce Reed on education reform, teachers and charters is from The Los Angeles Times. I was particularly struck by this comment he made:

It’s important for the long-term success of the reforms that the people with the most at stake — parents and students — are at the front lines.

I obviously have no problem with parents and students being involved in education policy issues. However, I am struck by his omission of a group of us called “teachers” from his statement. It’s in keeping with efforts by some “school reformers” to drive a wedge between educators and families. You might be interested in The Best Reasons Why Parents Should Be Looked At As Allies & Not Targets Of Blame.

A modest proposal for when Common Core testing collapses is an intriguing post by Grant Wiggins.

What About the Kids Who Don’t Work Hard and Won’t Be Nice? is a great post by EdGator. I’m adding it to The Best Posts & Articles Analyzing Charter Schools.

Are school closings the ‘new Jim Crow’? Activists file civil rights complaints. is from The Washington Post. I’m adding it to The Best Posts & Articles On The Impact Of School Closures — Suggest More!

Teaching to the tech: On Sacramento schools, Common Core and the digital divide: Will a contentious test and shiny new computers help bridge the technology gap? is an article in the Sacramento News and Review that will give you a sense of what’s going on in our neck of the woods.

Berkshire’s Radical Strategy: Trust is from The New York Times and has a lot of applicability, I think, to education policy and to the classroom. I’m adding it to The Best Posts About Trust & Education.

America’s dangerous education myth: Why it isn’t the best anti-poverty program is from Salon. I’m adding it to The Best Articles Showing Why Education Reform Is NOT The Best Way To Fight Poverty.

Quote Of The Day: Bill & Melinda Gates On Their Funding For Education