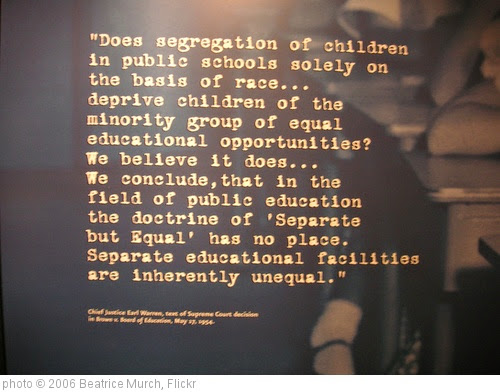 Boy oh boy, have there been a lot of commentaries published about the recent 60th anniversary of Brown vs. Board of Education.

See: Linda Brown, Of Brown vs. Board Of Education Case, Dies – Here Are Resources About Her Life

I’ve been less than impressed by most.

Here are the ones I thought were particularly useful (note that I linked to some of them in a recent “round-up” of ed policy posts):

Five myths about Brown v. Board of Education is from The Washington Post.

Sixty Years After Brown V. Board, Black Teachers Are Disappearing—Again is by Melinda Anderson.

60 Years After Brown v. BOE, Mostly White Reformers Try To Fix ‘The Civil Rights Issue Of Our Generation’ is from The Huffington Post.

Sixty Years After Brown, Latino Students Are Most Segregated, Report Says is from Ed Week.

60 years later, desegregation of schools not done is from the Associated Press, as is Segregation gains ground 60 years after Brown.

How to help students of color, 60 years after historic Brown v. Board ruling appeared in The Washington Post.

Brown v. Board at 60: Why Have We Been So Disappointed? What Have We Learned? is by Richard Rothstein.

Six Decades After Brown v. Board is from Ed Week.

A Collection Of Useful Posts, Articles & Videos On Race & Racism

Plaintiff Oliver Brown Would Have Been 100 Years Old This Week: 8 Ways America’s Schools Have (and Haven’t) Changed Since the Supreme Court’s Brown v. Board Verdict is from The 74.

If you don’t know what the historic Brown v. Board ruling is but know you should, watch this 6-minute video is from The Washington Post.

When I teach this topic I always make the connection with Mendez vs Westminster, most of my students are Hispanic and it’s important for them to know about it.

A new book digs into a lesser-known and negative consequence of one of the nation's most significant civil rights milestones.https://t.co/nywB57p3ra

I’m Sorry, I Just Can’t Help Myself: Bennett Scandal Is A Gift That Keeps On Giving

The Best Images Of The Ring Of Fire Eclipse