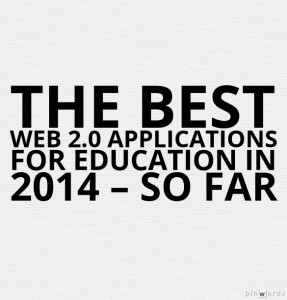 It’s that time of year again when I start posting mid-year “The Best….” lists. There are over 1,300 lists now.  You can see them all here.

You might want to visit previous editions, as well as The “All-Time” Best Web 2.0 Applications For Education:

I don’t rank my mid-year lists, but do place them in order of preference in my end-of-year lists.

Here are my twenty-two choices for The Best Web 2.0 Applications For Education In 2014 (so Far) — not ranked in any order:

slidebean is a new free tool for creating online slideshows. It provides multiple formats and the ability to search the Web, within the application, for images. I’ve added it to The Best Ways To Create Online Slideshows.

Zaption looks like a useful tool for creating interactive videos for students.

Google has unveiled Google Classroom, which looks like a one-stop shop for teachers and students. It’s free, with no ads, and describes itself as providing the ability to. It’s invite-only for now, but is supposed to be available to anyone by September.

TUZZit is a free online graphic organizer tool that provides lots of different options of organizers (you can also create your own); lets you paste online images videos, virtual post-it notes and more onto them; and then you can share your creation with online collaborators. In some ways it seems like an Exploratree on steriods (that site is on Not “The Best,” But “A List” Of Mindmapping, Flow Chart Tools, & Graphic Organizers list). In other ways, it reminds me of tools on The Best Online Virtual “Corkboards” (or “Bulletin Boards”) list.

Appear.in seems like a super-simple video conferencing site for up to eight people that doesn’t even require any registration.

Booktrack Classroom has books in the public domain online to which they’ve added “soundtracks” — music, street sounds, etc. In addition, students can create their own soundtracks to books that they write. Even better, teachers can create virtual classrooms with assigned readings and/or to share their own creations. And, best of all, it’s free.  You can read many of the books without having to register, but must do so in order to create them. It’s very, very easy to create your own books — the site has lots of sounds and music you can add to the text. Oddly, though, it doesn’t seem to provide the option of recording your own narration or sound effects. With those features, it would make it particularly useful to English Language Learners and also make it a more engaging creative activity for everyone.

Tapestry is both an online tool and an app that has multiple storymaking tools. You can read more about it at TechCrunch.

Flip Quiz is an easy site that lets you create an online Jeopardy-like game board that students can play.

ExamTime is sort of a flashcard site on steroids that provides a number of other tools, too.

Curriculet lets teachers assign what appears to be books in the public domain (though I might be wrong on that) and embed quizzes and questions into them.

Function Carnival is a new site that lets you set-up virtual classes, have students watch videos, and then have them create graphs based on what they see. I don’t really understand it, but it looks cool, Dan Meyer helped create it (which means it has to be good), and you can read more about it here.

ClassFlow is a new tool that was unveiled by Promethean in January.  It looks pretty interesting, though I’ve got to wonder what it’s cost structure is going to end up being. I suspect that Promethean isn’t going to make it entirely free forever, but maybe I’m just being cynical. It seems like a pretty easy tool for teachers to use to create multimedia presentations for the classroom and, apparently, provides a way for students to respond to teacher questions (I didn’t explore that feature). I also think it would a useful tool for students to use to create lessons that they would teach to their classmates.

Gibbon lets you easily create what they call “flows,” which are basically lists of web resources with instructions written by the flow’s creator. I think Gibbon has ambitious plans but, for teachers, it’s an easy tool for teachers to create Internet scavenger hunts for students and for students to create them for their classmates.

Stupeflix, which is on Not The “Best,” But A List… Of Online Video Editors list, has launched a free iPhone app called Replay that — at least to me — looks very, very Animoto-like. It lets you easily turn your photos into music videos.  I’m assuming there are lots of differences between the two, but I could only find two in my admittedly quick try-out of Replay, and both came out in Replay’s favor: one, the process appeared a lot faster than in Animoto’s app and, two, Replay appears to provide a number of features that Animoto requires you to pay (admittedly, not a lot) for…

There are lots of sites out there that let you create virtual “corkboards” and you can see them at The Best Online Virtual “Corkboards” (or “Bulletin Boards”). Padlet (formerly known as Wallwisher) is probably the most well-known tool of this kind. Richard Byrne  shared about a new site that might end up being the best of the bunch. It’s called Stoodle.

Canva is a new tool for creating infographics.

PixiClip is a neat drawing tool. It lets you make a drawing and record either audio-only or a video to go along with it. It also lets you upload an image from the web and “mark it up,” but I think there are plenty of other web tools that let you do that easily enough — and let you grab images off the web with photo url addresses (PixiClip just lets you upload one from your computer) — so I don’t think that feature particularly stands out (you can see those other tools at The Best Online Tools For Using Photos In Lessons).

If you found this post useful, you might want to look at the 1,300 other “The Best…” lists and consider subscribing to this blog for free.

The Best Places To Find Research On Technology & Language Teaching/Learning

Finding Similar Images To Use For Compare/Contrast Prompts