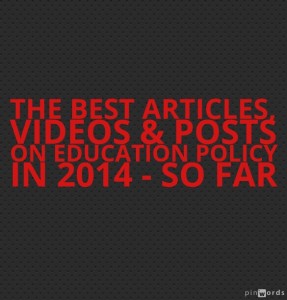 Here are my choices for The Best Articles, Videos & Posts On Education Policy In 2014 – So Fa (not in order of preference):

Thanks to Jack Schneider, I learned about a post by Ben Spielberg titled The Problem with Outcome-Oriented Evaluations. It’s a great piece on teacher evaluation, and reflects important points that are seldom raised in discussions on the topic. He described the value of evaluating inputs, as opposed to outputs. In other words, most teacher evaluation discussion is focused on measuring student outcomes. But, as Ben points out, we often have far less control over those outcomes than is believed.

What If Teacher Evaluation Isn’t Actually Broken After All? by Paul Bruno is a really excellent post.

Paul wrote another great piece titled Why Education Reform is Probably Not The Best Way to Fight Poverty.

Schooled: Cory Booker, Chris Christie, and Mark Zuckerberg had a plan to reform Newark’s schools. They got an education. appeared in The New Yorker.

The American Statistical Association issued a report  containing many criticisms of how Value-Added Measurement is used in teacher evaluations today. It’s not that lengthy, but you can read a summary at Education Week.

Why most professional development for teachers is useless is an excellent piece by Valerie Strauss at The Washington Post.

The Washington Post has republished a post I wrote last month on SEL. Here on my blog, I had titled it Let Them Eat Character. Their title is “The manipulation of Social Emotional Learning.”

Marc Tucker wrote a series on assessments over at Education Week:

The Failure of Test-Based Accountability

The Story Behind the SAT Overhaul is a very interesting piece in this week’s New York Times Magazine.

The False Markets of Market Based Reforms is by Bruce Baker.

Valerie Strauss at The Washington Post has published a piece by Sarah Blaine that I’m sure went “viral” among educators. It’s titled You think you know what teachers do. Right? Wrong.

Why False Compromises Won’t Resolve The Education Debate is by Jeff Bryant. He doesn’t use these exact words, but does a good job distinguishing the difference between a “half a loaf” and “half a baby.” Those are the terms we use in community organizing when describing the differences between a genuine compromise and one which is harmful.

I’ve previously connected Pope Francis’ views to education issues. Ed Fuller has written a really interesting post about the Pope’s comments on the education going on in seminaries and making connections to what’s going on in our own classrooms.

This Time It’s Personal and Dangerous is by Barbara Bray.

There’s a great interview with Linda Darling-Hammond on NPR . It’s headlined School Testing Systems Should Be Examined In 2014.

How hard is teaching? is by Valerie Strauss at The Washington Post.

I’ve written a lot about the importance of trust in education. In fact, I have a list titled The Best Posts About Trust & Education. Nobel Prize winner Joseph Stiglitz puts that issue in a broader context in New York Times, while at the same time making the connection to education. In No One We Trust is a must-read.

Our Kids — Coddled or Confident? is an excellent post by John Kuhn, and appeared in Anthony Cody’s Education Week Teacher blog.

Let me know what posts and articles you think I’m missing.

The Best Posts & Articles On The Florida Teacher Evaluation Fiasco

“The Best Posts On The inBloom Data Fiasco”

An important new report was published raising major questions about the usefulness of Value-Added Measurement as a teacher evaluation tool.

Wisconsin Recall Fight Is On! (Plus Good NY Times Interactive On Battle)