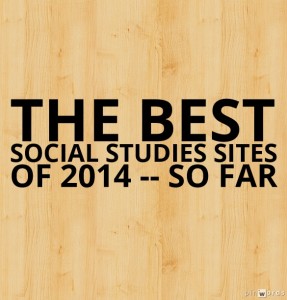 Here are my choices for The Best Social Studies Sites Of 2014 — So Far:

The Best Places For Students To Learn About…Their Names one of my fairly popular lists — learning about one’s name is a high-interest topic for students. Some relatively new and cool interactive sites have recently come online…

The Name Navigator seems to be a similar tool.

The Smithsonian has a series of one-minute “Ask Smithsonian” videos that answer questions on a variety of topics.

There are a number of sites out there that let you click on a location in Google Street View and then show you historical images of that same site going back many, many years. And you can access the best of them at The Best Historical Photo + Video Map-Based Sites. Google has announced their own somewhat similar (though far more limited) “Go Back In Time” feature – they’ve put photos from when they began taking them back in 2007 online so, at least in many places:

For this next one, I’m just going to begin with a quote from Open Culture:

British Pathé was one of the leading producers of newsreels and documentaries during the 20th Century. This week, the company, now an archive, is turning over its entire collection — over 85,000 historical films – to YouTube.

The archive — which spans from 1896 to 1976 – is a goldmine of footage, containing movies of some of the most important moments of the last 100 years.

It’s an amazing collection that will be gold mine to U.S. and World History teachers everywhere. And, in a bonus to teachers of English Language Learners, many appear to be close-captioned (not using YouTube’s error-plagued automatic system).

I’m adding this amazing video to The Best Websites For Teaching & Learning About World History:

Regular readers know I’m a big fan of using “What If?” history in the classroom — see The Best Resources For Teaching “What If?” History Lessons.

It looks like NPR has become a fan of the idea, too. They invited  readers to share their visions of what the world would have looked like if World War One hadn’t happened. See their article, A World Without World War I, Featuring Health-Nut Hitler.

Big Facts On Climate Change, Agriculture and Food Security is an extremely impressive new interactive site on the effects of climate change. It shows its effect in a variety of ways on every region on the earth.

Here’s how it describes itself:

Big Facts is a resource of the most up-to-date and robust facts relevant to the nexus of climate change, agriculture and food security. It is intended to provide a credible and reliable platform for fact checking amid the range of claims that appear in reports, advocacy materials and other sources. Full sources are supplied for all facts and figures and all content has gone through a process of peer review.

Big Facts is also an open-access resource. We encourage everyone to download, use and share the facts and graphic images. We believe that by sharing knowledge we can aid the type of interdisciplinary understanding and collaboration necessary for meeting the challenges posed to agriculture and food security in the face of climate change.

The Big Facts project is led by the CGIAR Research Program on Climate Change, Agriculture and Food Security (CCAFS). CCAFS is a strategic partnership of CGIAR and Future Earth, led by the International Center for Tropical Agriculture (CIAT). CCAFS brings together the world’s best researchers in agricultural science, development research, climate science and Earth System science, to identify and address the most important interactions, synergies and tradeoffs between climate change, agriculture and food security.

There are quite a few online geography games out there, and you can see them at The Best Online Geography Games. Many of them are pretty hard, and can be frustrating to students.

The Washington Post keeps on coming up with excellent collections of maps and charts.

Last year they published 40 maps that explain the world. It linked to another site called 40 Maps They Didn’t Teach You In School that also has a number of other good maps. However, that second site also includes a few maps with topics and language that wouldn’t be appropriate for the classroom.

Then, The Post published a sequel: 40 more maps that explain the world.

I added both to The Best Websites For Learning & Teaching Geography.

The Post hasn’t stopped there. They’ve also published 40 charts that explain the world, which I added to The Best Multimedia Resources For Introducing Students To The Advantages Of Charts, Graphs & Infographics.

The BBC has launched an exhaustive interactive site on World  War One, which they call the first in a new way they say they plan to rebrand all their content. The new brand is called iWonder, and their World War One iWonder Guide has just about anything you want to know and is presented in an interactive and accessible format. It even appears that all the video can be seen by viewers in the U.S., which is a surprise since often BBC video is blocked here.

Dan Pink shared this cool translator map on Twitter. It uses Google Translate to translate English into any major European language and then shows the word on the geographical location where the language is primarily spoken. You can read more about it at Business Insider.

Median Income Across the US is a nice interactive map from WNYC that shows the income levels of all the census tracts in the United States.

They’ve unveiled a third one in the series, this one focusing on Native Americans, and it looks great.

You can play A Cheyenne Odyssey here, and all the games here. You can read more about the new game here.

The Best Sites For Learning About South Africa

The Best Resources On The Protests In Ukraine

The Best Sites For Learning About India

The Best Resources On The Missing Malaysia Airlines Plane

The Best Blogs For Sharing Resources/Links — 2009

Another Decent Tool To Teach About The Financial Crisis