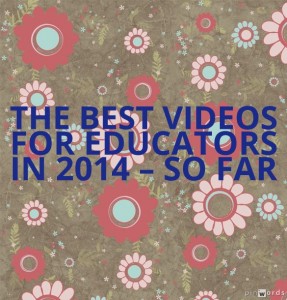 Here are my choices for The Best Videos For Educators In 2014 – So Far:

Over at Vox, Ezra Klein interviews Ta-Nehisi Coates about his article, “The Case for Reparations.” I’ve embedded the video below, but Vox has a nice interactive table of contents that might make it more useful — especially if you don’t have an hour to watch the whole thing. I’m adding it to A Collection Of Useful Posts, Articles & Videos On Race & Racism.

Who’s not familiar with the famous Schoolhouse Rock video, I’m Just A Bill? Just in case, though, it’s the second video after this description. The first video is an updated version by Vox that is more cynical and more accurate (I’m not sure of that one will show-up in an RSS Reader).

I added this video to The Best Hans Rosling Videos:

I added this video to The Best Resources For Understanding How To Interpret Education Research:

I’ve previously posted the video and links to the full text of George Saunders’ well known commencement speech on “The Importance of Kindness.”

Now, this animation of part of it has been created….

I added this next video from Business Insider to The Best Sites For Learning About The World’s Different Cultures:

I added this amazing video to The Best Websites For Teaching & Learning About World History:

I added this video to The Best “Language Maps”:

This next video is only a little over two minutes. Watch it til the very end…

Neil deGrasse Tyson shared this great video showing effective teaching in action. I’ve added it to The Best Places To Learn About (And View Video Clips Of) Teachers In The Movies:

Here are two good videos. Make a point of reading Joe Bower’s analyses of the South African reading commercial (the first video) and of the video of the young girl learning to ski. You won’t be disappointed.

John McCarthy shared this short video clip of U.S. Olympic bobsledder Lolo Jones. She begins by sharing her favorite quote (though doesn’t cite the source and I can’t find it online, either):

I showed the video to my students, along with writing that quotation on the board. Then, I asked them to respond to this writing prompt:

What is Lolo Jones saying about how we should view failure? What do you think of her view? To develop your position, be sure to include specific examples. These examples can come from the video, anything else you’ve read, and/or your own observations and experiences.

I added this to The Best Posts, Articles & Videos About Learning From Mistakes & Failures and to My Best Posts On Writing Instruction (where I collect all my writing prompts).

I’m Not Sure You’ll Find A Better Video Illustrating The Importance Of Libraries Than “El Bibliotecario”:

The Librarian / El Bibliotecario from Facebook Stories on Vimeo.

This is a very creative video from TED-Ed. You can see the whole lesson here.

Ann Foreman shared this Life of Brian video on Facebook. It’s a classic scene of how NOT to teach grammar:

TED Ed shared a nice lesson and video called “Who Invited Writing?” You can see the entire lesson here:

@Larryferlazzo Patience vs. speed. They both get to the bottom, but which one wants to try it again soon? Ha.

I don’t think I’d use this with students, but, as Greg Toppo said when he shared this on Twitter, it seems like a “spot-on take on bullying.”

Because of that, I’m adding it to A Very, Very Beginning List Of The Best Resources On Bullying.

Wonderful Video (& How To Use It In Class): “Confessions Of An Idiom”

Video: “How Much Damage Can An Earthquake Do?”