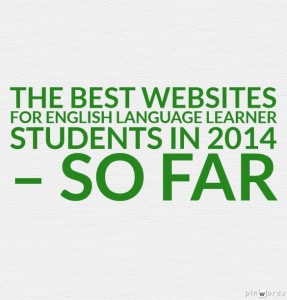 Here are my choices for The Best Websites For English Language Learner Students In 2014 – So Far:

Thanks to Richard Byrne, I recently learned about Quill.

It provides well-done interactive exercises to reinforce grammar exercises and the real advantage is that you can create virtual classrooms to track student progress.

There’s so much there, and it’s so accessible — music, instruments, and you can even compose your own, play it, and share your creation with the world.

The text is probably at a high-Intermediate English level. About the only way they could have made it better is if they had provided a feature to have audio-narration of the text — that would make a big difference for English Language Learners.

Because of that shortcoming, I don’t feel like I can add it to The Best Music Websites For Learning English. However, ELLs can certainly compose their own music and explain what they want it to communicate. That’s always a nice language-learning activity.

I’ve been effusive in my praise for the mobile language-learning app Duolingo — my English Language Learner students love to use it both in class and outside of it.

It just got a whole lot better…

The new version features courses to learn English for Chinese and Japanese speakers….As part of this update, the service now also features English courses for Hindi speakers…While the addition of these new languages is one of the highlights of this launch, the other is the launch of a number of new game-inspired learning modes, including a multi-player feature that allows people to compete with each other in real time (or you could always play against a bot, too).

They’ve added more features, too, and you can read about them at TechCrunch.  It’s important to note that it appears that TechCrunch made an error — the Chinese version doesn’t seem quite ready yet.

They are going be very popular and helpful to my students!

I’ll add this update to The Best Mobile Apps For English Language Learners.

Citizen Sort creates free online video games where players sort and identify items as part of a serious science investigation. One of their series of games is called “Happy Match” where you have to describe various images.  It appears to me that it could be useful for English Language Learners to learn some vocabulary, plus learn a little science, too. They have some other games on the site, and say they’re coming out with another one that looks particularly interesting called “Mark With Friends” that might also have ELL potential.

“Connect With English” was produced by Annenberg a number of years ago, and is a great video series for English Language Learners. The series has been free to watch via the web, but you’ve had to purchase student exercise books. I’ve previously  posted our own “worksheet” that we developed for students to use.

Though the videos are just beginning to show their age a bit, they’re still wonderful resources.

What’s even better, though, is that Annenberg has just unveiled a new free Connect With English site with tons of interactive exercises for students to use.