The Best Resources For Learning About The Children Refugee Crisis At The U.S. Southern Border 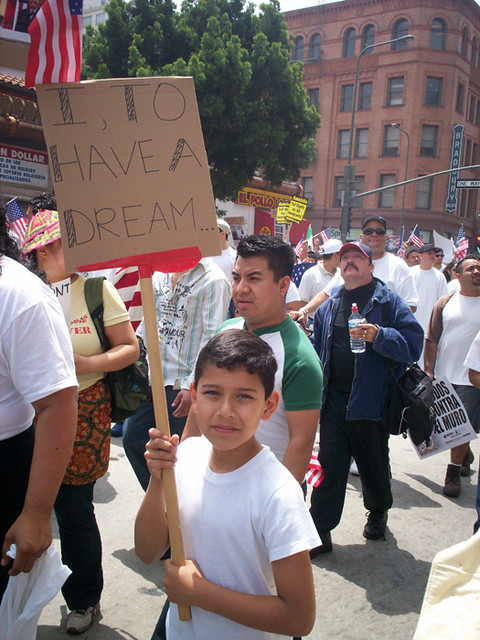 I’ve previously shared articles on the children refugee crisis (and, make no mistake — it is a refugee crisis, not an immigrant problem), but thought it would be useful for me to collect them all in one list. Feel free to offer additional suggestions in the comments section:

RT @LydiaGuzman: Change the language: they are not immigrants, they are REFUGEES. pic.twitter.com/1FEkCO5GsD

U.S. Schools Gear Up for Surge of Young Immigrants is from Ed Week.

Wave Of Guatemalan Migrant Children Presents Unique Challenges is from NPR, and provides another perspective on the child migration tragedy.

Surge of Unaccompanied Minors Crossing Border Presents Education Challenges is from Education Week. You might also be interested in 13 facts that help explain America’s child-migrant crisis from Vox (which they just updated).

Children at the Border Raise Question of Who Is a Refugee is from NBC News.

The awful reason tens of thousands of children are seeking refuge in the United States is from Vox.

The Town Where Immigrants Hit a Human Wall is from The New York Times.

These two maps show the violence driving Central American children to the US is from Vox.

Child immigration crisis is a photo gallery from CBS News.

The Children Crossing Our Border Just Want a Better Life—Let’s Treat Them as Our Own is by Jose Luis Vilson.

Fleeing Gangs, Children Head to U.S. Border is from The New York Times.

Book Drive Seeks To Give Immigrant Kids Chance To ‘Daydream’ is from NBC News. You can also access a special section they have on all their stories about the refugee crisis.

What happens when deportation separates parents from their kids? is from Vox.

Shame on you, Murrieta, for blocking immigrant detainee buses is from The L.A. Times.

Migrant children describe fear of facing protesters is a news report from an ABC affiliate in Southern California.

A Refugee Crisis, Not an Immigration Crisis is from The New York Times.

The So-Called Immigration Border Crisis Is Neither is from The Daily Beast.

Vox has just published a very useful list of organizations that are helping the child refugees in the Southwest, and ways people can help them.Check out What you can do to help the US’ 52,000 child migrants.

Schools a haven for kids who crossed border alone is from The Associated Press.

The U.S. Border Crisis is a series of infographics from Reuters.

Surge in unaccompanied children at the border is an infographic from The Washington Post.

The process Congress wants to use for child migrants is a disaster is from Vox.

What’s Causing The Latest Immigration Crisis? A Brief Explainer is from NPR.

Border Crisis: When Has the U.S. Provided Refuge for Kids in the Past? is from NBC News.

Pope Says Children at U.S. Border Must Be ‘Welcomed and Protected’ is also from NBC News.

A Central America expert explains the root causes of the migrant crisis is from Vox.

The Myth of the Diseased Immigrant is from TIME.

Towns Fight to Avoid Taking In Migrant Minors is from The New York Times.

US communities diverge on child migrant response is from The Associated Press.

Unaccompanied migrant children in the United States: Research roundup is from Harvard. Thanks to Alexander Russo for the tip.

Child Migrants Have Been Coming to America Alone Since Ellis Island: And no, we didn’t just send them packing. is from Mother Jones.

White Rage in Murietta, Oracle… and Little Rock is from The Nation.

Make the Border Kids Americans is from Politico.

New York Communities Prepare for Influx of Unaccompanied Minors is from Ed Week.

Q. and A. Children at the Border is from The New York Times.

Our Fear of Immigrants is from The Pacific Standard.

Fastest Growing Group of Migrants Arriving at Border: Children Under 12 is from Education Week.

The Immigrant Kids Have Health Issues — But Not The Ones You’d Think is from NPR.

Nearly three quarters of Americans think the U.S. should shelter (not rush to deport) unaccompanied minors is from The Washington Post.

For Schools With Child Immigrants, What Resources Are Available? is from Education Week.

Here’s an important interview that was on The Daily Show:

Guidance and Resources for Schools and Staff Working with Unaccompanied Minors is from Colorin Colorado.

What happens to migrant children after the Border Patrol detains them? is from The Center For Investigative Reporting.

What Makes Someone a Refugee? is from The Atlantic.

Why the Border Crisis Is a Myth is from The NY Times.

Schools brace for up to 50,000 migrant kids is from USA Today.

With Uncertainty, Schools Prepare for New Arrivals is from The Texas Tribune.

The Wilson Quarterly has a really impressive interactive.

Hope Dwindles for Hondurans Living in Peril is from The New York Times.

A day in S.F. court with undocumented kids flooding the system is from The San Francisco Chronicle.

S.F. school for immigrants offers soft landing to new kids in town is from The San Francisco Chronicle.

After Journey From Honduras, Boy Starts School in U.S. is from Ed Week.

LAUSD opens doors to young Central American immigrants is from The LA Times.

Five Children Murdered After They Were Deported Back To Honduras is from Think Progress.

Immigrant Minors From Central America Bring Hope, Past Trauma to U.S. Schools is from The Hechinger Report.

The PBS News Hour did a segment titled Schools learn to cope with influx of undocumented teens. You can see the transcript here.

A Year Later: The School System That Welcomed Unaccompanied Minors is from NPR.

Young, Illegal and Alone is from The Atlantic.

Statistic Of The Day: Number Of Unaccompanied Minors Surge At Border

Will Schools Be Prepared for Latest Surge of Unaccompanied Minors? is from Ed Week.

Statistic Of The Day: Growing Numbers Of “Immigrant” Students

U.S. to Admit More Central American Refugees is from The New York Times and is great news!

These Are Children, Not Bad Hombres is from The New York Times.

The Best Sites For Learning About The Mount St. Helens Eruption

Statistic Of The Day: Economic Inequality In The U.S. & The World