The New Yorker, two months after publishing an excellent article on the school reform fiasco in Newark which made The Best Articles & Posts On Education Policy In 2014 – So Far list) has now published an extraordinary feature on the Atlanta testing scandal — Wrong Answer: In an era of high-stakes testing, a struggling school made a shocking choice — by Rachel Aviv. It’s freely available online.

The “go-to” quotations are numerous, and here are a few that are just the tip of the iceberg. After the excerpts, I include links to related “The Best” lists, though you might want to start-off at The Best Posts & Articles About The Atlanta Testing Scandal: 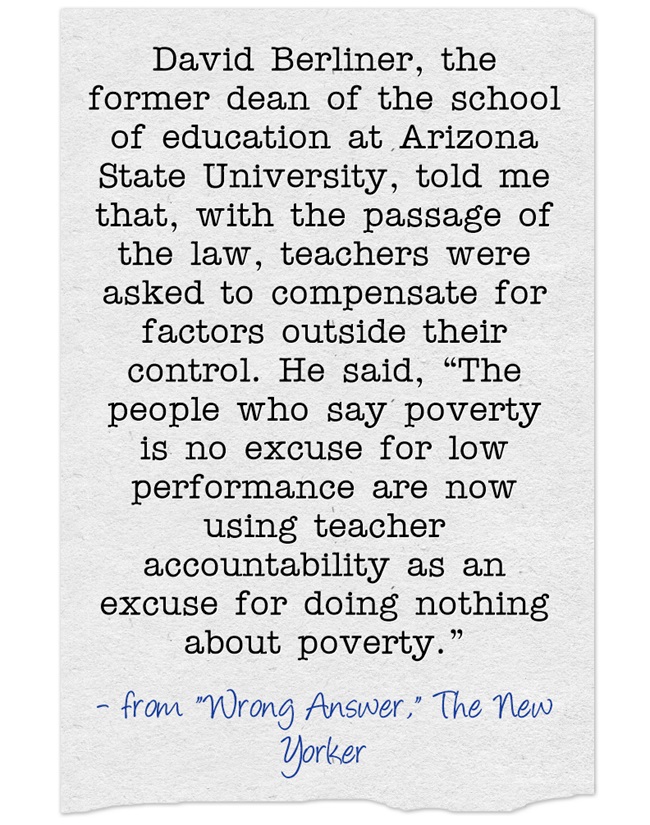 After more than two thousand interviews, the investigators concluded that forty-four schools had cheated and that a “culture of fear, intimidation and retaliation has infested the district, allowing cheating—at all levels—to go unchecked for years.” They wrote that data had been “used as an abusive and cruel weapon to embarrass and punish.” Several teachers had been told that they had a choice: either make targets or be placed on a Performance Development Plan, which was often a precursor to termination. At one elementary school, during a faculty meeting, a principal forced a teacher whose students had tested poorly to crawl under the table.

To explain the improvement in scores, [Superintendent] Hall told the investigators that “an effective teacher three years in a row will completely close the gap between a child born in poverty and a child born to a middle-income family.” This theory, in its earliest form, derives from a study by William L. Sanders, a statistician formerly at the University of Tennessee, but the findings, which have contributed to a nationwide effort to rate teachers rigorously, have been overstated to the point of becoming a myth. According to a recent statement by the American Statistical Association, most studies show that teachers account for between one and fourteen per cent of variability in test scores.

John Ewing, who served as the executive director of the American Mathematical Society for fifteen years, told me that he is perplexed by educators’ “infatuation with data,” their faith that it is more authoritative than using their own judgment. He explains the problem in terms of Campbell’s law, a principle that describes the risks of using a single indicator to measure complex social phenomena: the greater the value placed on a quantitative measure, like test scores, the more likely it is that the people using it and the process it measures will be corrupted. “The end goal of education isn’t to get students to answer the right number of questions,” he said. “The goal is to have curious and creative students who can function in life.” In a 2011 paper in Notices of the American Mathematical Society, he warned that policymakers were using mathematics “to intimidate—to preëmpt debate about the goals of education and measures of success.” 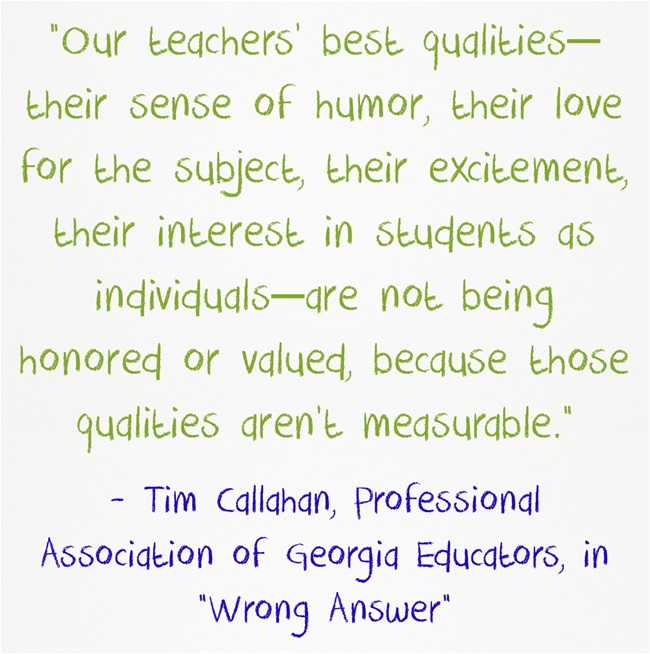 Here are some related “The Best” lists: