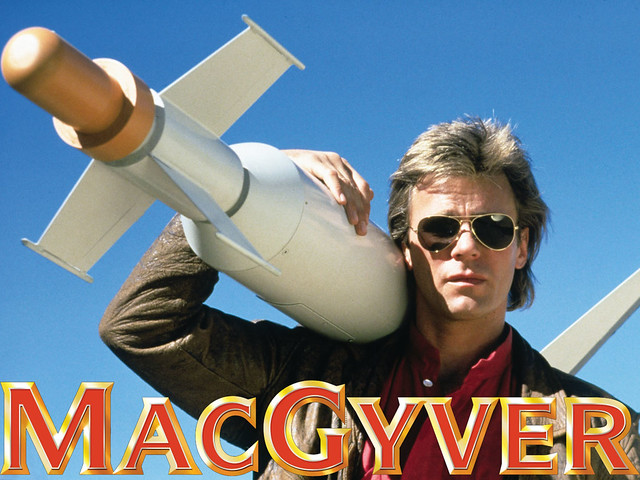 I just discovered a MacGyver wiki that has a List of problems solved by MacGyver. It lists all the episodes, along with the problems he solved in each one and how he solved them. In addition, today I discovered that CBS has put all the MacGyver episodes on YouTube.

Based on quick review, here are a few more clips I’m adding to The Best Movie Scenes, Stories, & Quotations About “Transfer Of Learning.” I’m sure there are more if you want to take the time to look through the wiki. On some of them, I have included quotes from the wiki. I was originally going to use TubeChop to just share the clips themselves, but it didn’t seem to be working well today. So, I’ve embedded some of the entire episodes with instructions of when to start them:

On this one, the Pilot Episode, “”MacGyver plugs a sulfuric acid leak with chocolate. He states that chocolate contains sucrose and glucose. The acid reacts with the sugars to form elemental carbon and a thick gummy residue (proved to be correct on Mythbusters).” Start at 35:40 and end at 38:20

On this next one, Fire and Ice, “MacGyver opens a vault and steals back some diamonds first dusting the buttons for fingerprints with graphite from a pencil. The vault has a three-digit combination with unique digits and six buttons. The dusting narrows down the 120 combinations to 6 and the vault is easily opened. He then neatly gets the diamonds in a small bag using a paper as a funnel. (31.30) “Math and science do prove useful.” Start at 32:30 and end at 34:15.

Here, “MacGyver created a diversion and a surprise attack using an inner tube, pressured air, chloride, a catalyst, two glass jars and a gas mask. The inflatable boat was put in a truck and filled with air until the glass broke creating a loud noise. Meanwhile MacGyver filled the two gas bombs filling one glass jar with chloride and the other with a catalyst. Then he threw them at the bad guys resulting in a reaction producing toxic chlorine gas when the two liquids mixed. (36.00) When I was a kid my grandpa gave me two things I’ll never forget; a subscription of popular mechanics and a chemistry set. And this place was one BIG chemistry set! – MacGyver” Start at 36:00 and ends at 44:00

Video: “Why Students Should Learn a Second Language”

If You Needed More Research Saying It’s Important To Be Positive In Class….