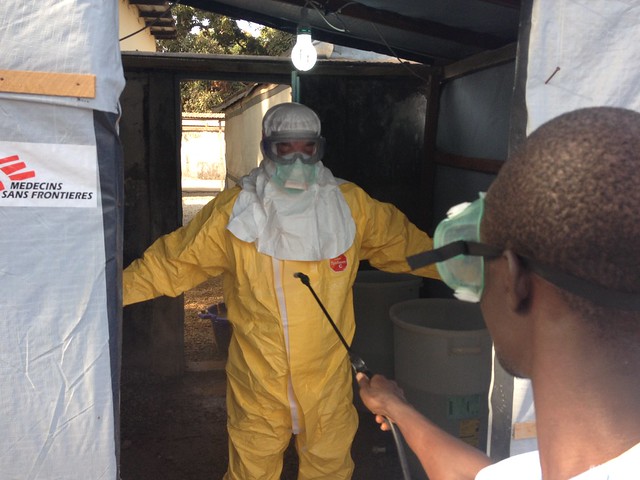 The Ebola Virus is spreading in Africa, and potentially to an even wider area in the future.

Here are some resources to help understand what is happening (and please make your own suggestions in the comments):

The Worst Ebola Outbreak in History is Getting Worse is from GoKicker.

The deadliest Ebola outbreak in history is happening right now is from Vox.

Ebola Outbreak in West Africa Now the Worst in History is an interactive guide at Mashable.

Deadliest ever outbreak of Ebola virus: What you need to know is from CNN.

Check out this An interactive guide to Ebola at ThingLink.

Here’s an older Ebola Q & A from CBBC Newsround.

Deadly Ebola virus on the move in Africa is an infographic the Washington Post made in April, but it still has useful information.

Here are a number of useful videos, though I don’t think people seeing this post on an RSS Reader will be able to view all of them:

Doctor Infected with Ebola Asks That Experimental Serum Go to Sick Colleague Instead is from The Atlantic.

What would happen if Ebola came to the United States? is from Vox.

Ebola: Liberia shuts schools to tackle outbreak is from The BBC.

Daily chart: Ebola’s spread is from The Economist.

Here’s a useful video from TIME:

Deadly Ebola virus on the move in Africa is a Washington Post infographic.

Infographic: Ebola By the Numbers is an infographic from TIME.

What You Need to Know About the Ebola Outbreak is from The New York Times.

Mapping the world’s worst Ebola epidemic is from Al Jazeera.

The deadly spread of Ebola – clickable map is from Channel Four in the UK.

Ebola outbreaks from 1976 to now – interactive map is from The Guardian.

This detailed model of the Ebola virus is about as terrifying as you’d expect is from The Washington Post.

Using a Tactic Unseen in a Century, Countries Cordon Off Ebola-Racked Areas is from The New York Times.

An Ebola treatment center is a Washington Post infographic.

Understanding the Ebola Outbreak: A Multimedia Resource Guide is from The Lowdown.

The NY Times has updated their What You Need to Know About the Ebola Outbreak infographic.

Ebola in the United States: What You Need to Know is from TIME.

Map: These are all the countries with confirmed Ebola cases is from Vox.

First Ebola case diagnosed in US is an interactive from The Associated Press.

Don’t panic over Ebola in America is from Vox.

Ebola is in the US. Here’s how health officials will contain it. is from Vox.

What are the chances Ebola will spread in the United States? http://t.co/wzxATi1G9x pic.twitter.com/vHUjziTvAV

How to Help in Efforts to Stem Ebola’s Tide http://t.co/AnHb4d5utz

What are the chances Ebola will spread in the United States? http://t.co/UbbZV17go8 pic.twitter.com/RmV4gBRdPG

Myth: Ebola is the most dangerous disease on the planet http://t.co/G1uTU0KY9A pic.twitter.com/2E0uxXIYtd

Five children who came into contact with the Dallas Ebola patient are being monitored http://t.co/t9xB3dtEas pic.twitter.com/Foi7mMJUvn

In Schools, the Only Sign of Ebola Is Fear http://t.co/72xa9scxvp

Situation report on the first Ebola case in the U.S.: http://t.co/54FQczWYDF pic.twitter.com/YGDvvA4Ms5

Ebola in the U.S. is an updated Associated Press interactive.

Changes to Ebola Protection Worn by U.S. Hospital Workers is an infographic from The NY Times.

Visualised: how Ebola compares to other infectious diseases is from The Guardian.

WHO warns 10,000 new cases of Ebola a week are possible is from The Guardian.

Ebola spreads slower, kills more than other diseases is an infographic from The Washington Post.

How to avoid being infected with the Ebola virus is from The Guardian.

How does an American nurse contract Ebola? With directions like these. is from Vox.

Examples Of School Hysteria Over Ebola

Read about this campaign at The Washington Post at its article headlined, ‘I am a Liberian, not a virus’: Campaign fights back against Ebola stigma.

This one is from TED-Ed. The full lesson is here.

A History of Ebola in 24 Outbreaks is a NY Times interactive.

Mawahtale is an interactive on Ebola.

The Best Comic Strips For Students & Teachers In 2014