Resources On The Shooting Death Of Michael Brown

The full story has yet to come out about what happened on Friday night in Ferguson (Vox has a good overview of what is known so far), but the larger narrative of the challenges facing so many of our African-American youth could not be more clear. 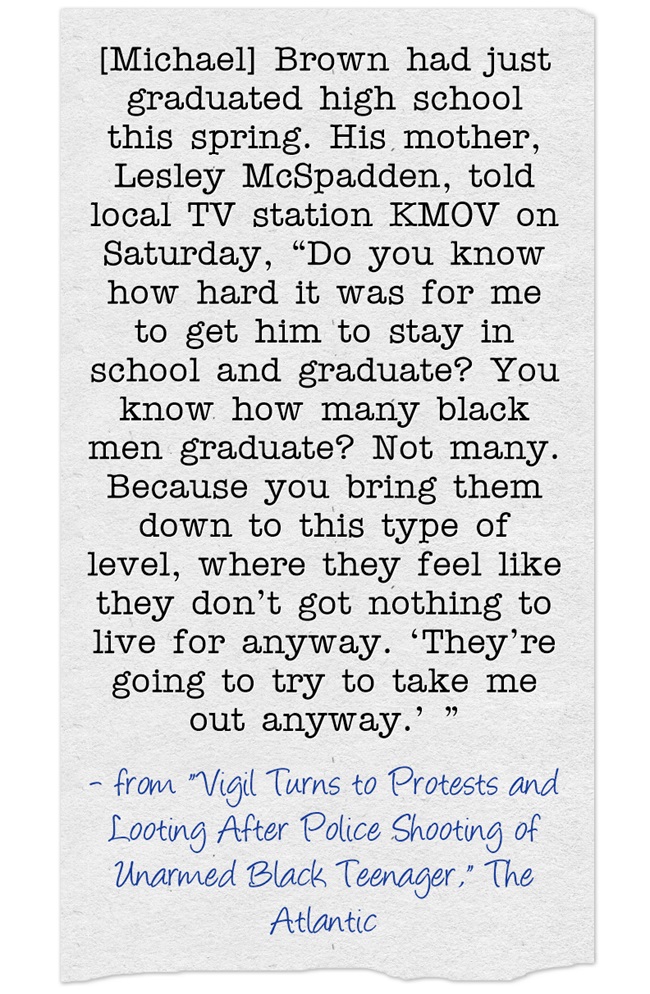 MLK: “…a riot is the language of the unheard…Social justice and progress are the absolute guarantors of riot prevention.” #Ferguson

MLK: “…violence will only create more social problems[, but] America must see that riots do not develop out of thin air. #Ferguson

Also, see You won’t prevent future riots by disregarding the psychology of crowds from The Guardian.

Lastly, check out the poem “Harlem” by Langston Hughes.

The Media Keeps Failing Black Teens is from The Atlantic.

Black Kids Don’t Have to Be College-Bound for Their Deaths to Be Tragic is from The Root.

Police Use Tear Gas On Crowd is from The Washington Post.

“@MichaelSkolnik: “A riot is the language of the unheard.” ~Martin Luther King, Jr. #Ferguson pic.twitter.com/SRgP1dBJtx”

RT @chrislhayes: I interviewed the key witness to the Michael Brown shooting last night. The police haven’t. Think about that.

“At This Point, Ferguson Is a City Under Siege:What’s being described as a “riot” is looking a lot more like an occupation” is from The Atlantic.

“How ‘Deferred Action’ Will Affect Classrooms”

Good PBS Series: “What I Hear When You Say Code Words”