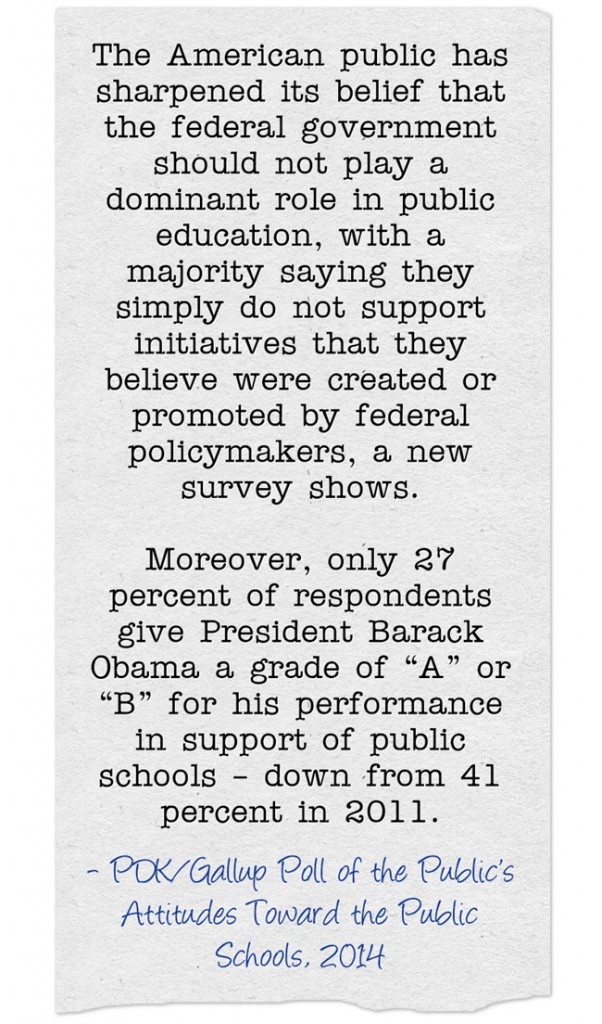 Every year for the past 45 years, Phi Delta Kappa and Gallup have done a Poll On Education issues. This year’s poll results were just released.

You can read a summary and the entire poll results here.

I’m going to just reprint parts of their press release because it gives a good overview of the results.First, though, here are links to my posts about the poll in previous years:

The Best Posts/Articles On This Year’s Phi Delta Kappa and Gallup Education Poll (2011).

Here’s are excerpts from their press release:

The American public has sharpened its belief that the federal government should not play a dominant role in public education, with a majority saying they simply do not support initiatives that they believe were created or promoted by federal policymakers, a new survey shows.

Moreover, only 27 percent of respondents give President Barack Obama a grade of “A” or “B” for his performance in support of public schools – down from 41 percent in 2011. A majority of those surveyed, 54 percent, do not think standardized tests are helpful to teachers; many do not understand how charter schools work, and the number of Americans saying they are familiar with the Common Core State Standards (CCSS) has skyrocketed in just one year, with a majority
saying they oppose the standards….

Yet when the focus was shifted from the respondents’ own local schools to ask about the performance of the nation’s schools in general, only 17 percent extended a grade of “B” or better to America’s schools….

….When asked a series of questions about standardized testing, the public generally supported various specialized tests such as those used for college entrance and Advanced Placement courses. But 54 percent of those questioned said they simply do not believe standardized testing in the classroom really helps local school teachers decide what to teach. Public school parents are even more negative about the value of standardized testing with 68 percent believing they are not helpful to teachers.

“Teachers are skeptical pragmatists of classroom-directed policies, not stone-age obstructionists”