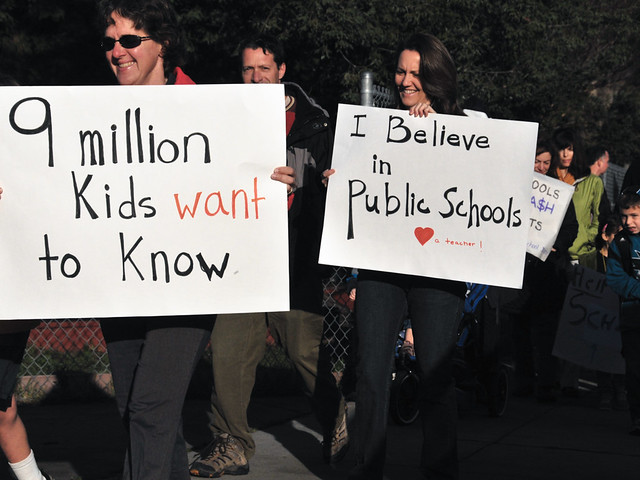 Here is this week’s collection of important articles and posts on educational policy issues:

I’ve got to start off with this extraordinary video of Dana Goldstein discussing “As if teachers’ jobs aren’t hard enough, they’re asked to fix poverty, too”:

I’m adding that video to The Best Resources On Why Improving Education Is Not THE Answer To Poverty & Inequality.

Career Advancement in the Classroom is by Walt Gardner at Ed Week. I’m adding it to The Best Posts, Articles & Videos On “Teacher Leadership.”

Will Common Core double the high school dropout rate? is from The Washington Post. In it, Valerie Strauss picks-up and elaborates on my previous post, McKinsey & Company Projects That Common Core Implementation Will Result In 15% Increase In Dropout Rate. I’m adding it to The Best Articles Sharing Concerns About Common Core Standards.

Common Core’s five big half-truths is by Frederick Hess. I’m adding it to the same list.

Supt. Deasy’s early and avid support of iPads under intense scrutiny is one of many recent articles discussing revelations about the iPad scandal at the Los Angeles schools. L.A. Unified exemplifies the forces that stifle public school reform is another LA Times piece about what’s going on there. And here’s another one where Deasy comes across incredibly defensive. As one person remarked to me, “Deasy may survive, but he’ll never recover.” This Ed Week post provides an excellent summary. I’m adding these articles to A Very Beginning List Of The Best Articles On The iPad Debacle In Los Angeles Schools.

Teacher-Led Professional Learning is a new organization primarily funded by the Gates Foundation, though it seems to have some good educators involved. However, I’m still not clear on what it’s doing. I’ll hold off putting them on  The Best Resources On Professional Development For Teachers — Help Me Find More list until I figure that out.

Research And Policy On Paying Teachers For Advanced Degrees is from The Shanker Blog.

Teach for America has faced criticism for years is from Vox and by Dana Goldstein, and is quite interesting. It offers a different perspective. I’m adding it to The Best Posts & Articles Raising Concerns About Teach For America.

Rating teachers not as easy as 1, 2, 3 is from Politico. I’m adding it to The Best Resources For Learning About Effective Student & Teacher Assessments.

The Myth Of The Superstar Superintendent? is from NPR.

What Would Martin Luther King, Jr. Say About What’s Going On In Wisconsin?