Wondering How To Handle A Controversial Topic In Class? What We Did This Week Worked Out Very Well 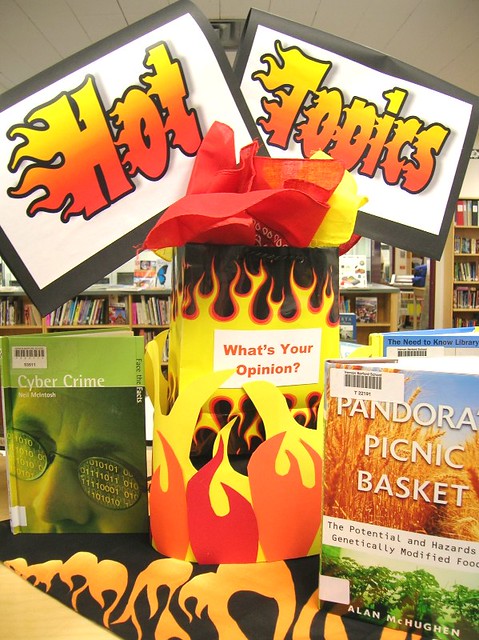 As all teachers know, controversial topics can be very tricky to handle in class. Here’s a process I used in my International Baccalaureate Theory of Knowledge classes this past week they went far better than I had expected, and I think this series of lessons might be able to be applied to other classes.

FIRST DAY: I introduced The Belief-Knowledge Continuum from our IB textbook. You can find it the continuum online in many places and it just so happens that our textbook’s version is available at Google Books. I’m not sure who originated it, so I’m wary of reproducing it in this post. But it’s really very simple — a number scale from negative ten to positive ten, with a few labels including impossible, probable and certain. “Probable” is also labeled “Belief” and “Certain” is labeled “knowledge.”

TOK’s definition of knowledge is “justified true belief.” This continuum doesn’t mean that belief is worse than knowledge. It just means that though we might believe something, we just don’t “know” for sure.

Then, our textbook lists a few items asking students to place them on the continuum (Christopher Columbus discovered America in 1492, Murder is wrong) — you can see the list here.

I have students work in pairs to create their own poster plotting each of those items and providing an explanation of why they placed it there. Students then share their charts and discuss where they agree and disagree.

SECOND DAY: Students read an excerpt from the philosopher Ruben Abel’s book “Man is the Measure.” In it, he lists the different kinds of “evidence” people use to justify their knowledge. You can find that excerpt here (I only use the section following the heading “Good Reasons”). In groups of three, students make a poster ranking the types of evidence from the one they think is most convincing to least convincing; they have to provide an example; be prepared to defend their ranking; and draw a picture representing each type of evidence.

THIRD DAY: In a “speed-dating” style (groups facing each other, and then when one group is done one of the lines moves to the next group while the other line remains where they are), students share and discuss their “evidence” poster. However, they use a specific process for their discussion.

Teach Thought has published a nice “26 Sentence Stems For Higher-Level Conversation In The Classroom.” I adapted them and created a shorter list just showing their “Clarifying,” “Agreeing,” and “Disagreeing” questions. Students used them to guide their discussions with each group. I was the timer, and was flexible in both speeding it up and slowing it down:

Students would then switch to discuss with another group (we did it about three or four times). In addition, I had asked students to keep in mind which poster they liked the best, and which disagreement they found most interesting.

After “speed-dating,” students met in their groups for a few minutes to discuss their favorite poster and which disagreement they found most interesting, and each group then gave a very short report.

After providing the group with the “winning” poster a dried fruit prize, I then gave students a half-piece of paper to write anonymously if they liked the use of the question/sentence stems and to say why or why not. I hadn’t tried using them before and want to get honest reactions. In both of my 35 student classes, everyone except for one or two students like them a lot and felt that without them the discussions would not have been productive.

FOURTH DAY: The warm-up activity was students writing down their response to:

Should we respect people’s racist or sexist beliefs? Why or why not? What might be the reasons they are using to justify those racist and sexist beliefs?

After a short discussion, I introduced a sheet developed by TOK teacher Remi Vicente called “Problems of Knowledge.” Basically, it’s a list of many of the reasons why people often confuse their “beliefs” with actual “knowledge.”

In their same groups of three, students reviewed the list and identified which ones they felt were the five most common “problems of knowledge.”

FIFTH DAY: In their same groups of three, I gave each a first section of that day’s daily newspaper (in one class, we also had access to computers) and distributed these instructions (here they are as a downloadable hand-out):

1) Take out the Belief knowledge continuum and your types of evidence poster.

2) Get with your group that developed the types of evidence poster.

3) Look at newspapers, news magazines and online news sites to identify current events – between two and five of them

4) Where are your chosen current events on the continuum – what is guiding the action of the primary person/people involved in the current events you chose. There may be more than one, and they might need to be “plotted” differently. Explain your decision.

5) Look at the types of evidence poster. Identify what evidence each of the primary people are using to justify their actions.

6) Look at the problems of knowledge sheet and poster you made. What flaws, if any, are the primary people making?

7) Make a simple poster for each current event showing where on the continuum you placed the current event and why, they type of evidence and flaws. Be prepared to share with class.

Students chose a variety of events, including President Obama’s de facto declaration of war against Islamic militants, the Ray Rice controversy, and the killing of Michael Brown. Because of the activities we did earlier, the quality and tone of the discussions was at an incredibly high intellectual level — examining evidence, points of view, and reasoning.

I also have to say that, perhaps for one of the few times in my years of teaching Theory of Knowledge, students really “got” how what they were learning could be applied to the world outside of school.

Admittedly, it took a lot of time. But, with this background, I think we can approach future discussions of current events in similar vein without all the days of preliminary build-up.

Let me know what you think of this series of lessons, and how you think I can make it better!

This Is A Great Passage For Learning How To Make Change