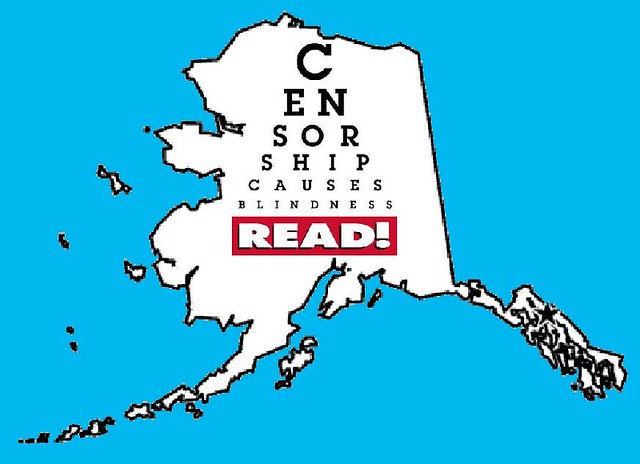 is an annual awareness campaign that celebrates the freedom to read, draws attention to banned and challenged books, and highlights persecuted individuals. The United States campaign “stresses the importance of ensuring the availability of those unorthodox or unpopular viewpoints to all who wish to read them” and the requirement to keep material publicly available so that people can develop their own conclusions and opinions. The international campaign notes individuals “persecuted because of the writings that they produce, circulate or read.”

Here are my choices for The Best Resources For Banned Books Week (feel free to suggest more):

Here’s an infographic from the ACLU.

The American Library Association has a list of frequently challenged books.

“@ACLU: It’s #Bannedbooksweek! Check out our hub for everything you need to know. https://t.co/VxV2vBL4pO pic.twitter.com/Vn7e3sJcv9”

Captain Underpants is 2013’s most challenged book — see what else made the list. #BannedBooksWeek http://t.co/2w9ctHhsvq

Banned Books By The Numbers (INFOGRAPHICS) is from The Huffington Post.

Censorship of books in US prisons and schools ‘widespread’ – report to UN is from The Guardian.

33 Must-Read Books To Celebrate Banned Books Week is from BuzzFeed.

Discrimination in Banned Books is a lesson plan from Teaching Tolerance.

In Banned Books Scavenger Hunt, The Prize Is Literary ‘Smut’ is from NPR.

Please include attribution to Readers.com with this graphic.

How Banning Books Marginalizes Children is from The Atlantic.

The top 10 books Americans tried to ban last year is from Quartz.

Access a database of 70,000 books banned around the world going back to 1575 is from Quartz.

Older people and Republicans, threatening free speech is from The Washington Post.

Students: Have your parents, teachers or school administrators ever forbidden you from reading a book because they thought its content or characters were inappropriate for someone your age? #BannedBooksWeek https://t.co/chOwXJPpWO

Banned Books Week runs from September 26th through October 2nd and the titles on this year’s list include @angiecthomas @DrIbram @nhannahjones @ClintSmithIII@halseanderson @JasonReynolds83
and many more. #readingcommunity purchase a #book today https://t.co/pwN9qMnik9

@nhannahjones on the meaning of #BannedBooksWeek. “the fact that we’re all talking about this fake controversy called critical race theory really speaks to how successful the public propaganda campaign has been.” https://t.co/qUzzLxgTYH

“This is actually trying to control the collective memory of this country,” Nikole Hannah-Jones told CNN. “And trying to say we just want to purge uncomfortable truths from our collective memory. And that’s very dangerous.”https://t.co/Y4LhPyv7sY

Book Ban Efforts Spread Across the U.S. is from The NY Times.

Meet the moms of color from Texas fighting book bans at their kids’ schools is from NBC News.

My Young Mind Was Disturbed by a Book. It Changed My Life. appeared in The NY Times.

Current weather: A blizzard of snowflakes in the red states is from The Washington Post.

Book bans are back in style is from Axios.

Books are being banned from school libraries. Here’s what that does to students. is from USA Today.

Why book banning is back is from Vox.

This wave of book bans is different from earlier ones is from The Washington Post.

In Tennessee, the ‘Maus’ Controversy Is the Least of Our Worries is from The NY Times.

How the new banned books panic fits into America’s history of school censorship is from Vox.

‘Unparalleled in intensity’ – 1,500 book bans in US school districts. is from The Guardian.

In a record year for book ban attempts, ALA says these 10 books were challenged most is from NPR.

Book Banning Efforts Surged in 2021. These Titles Were the Most Targeted. is from The NY Times.

“This moment we’re in right now was inevitable. It is a backlash to the protests of 2020, this feeling that these racial justice efforts have gone too far.” – @nhannahjones https://t.co/XF4BrF4oaX via @itskelseybutler 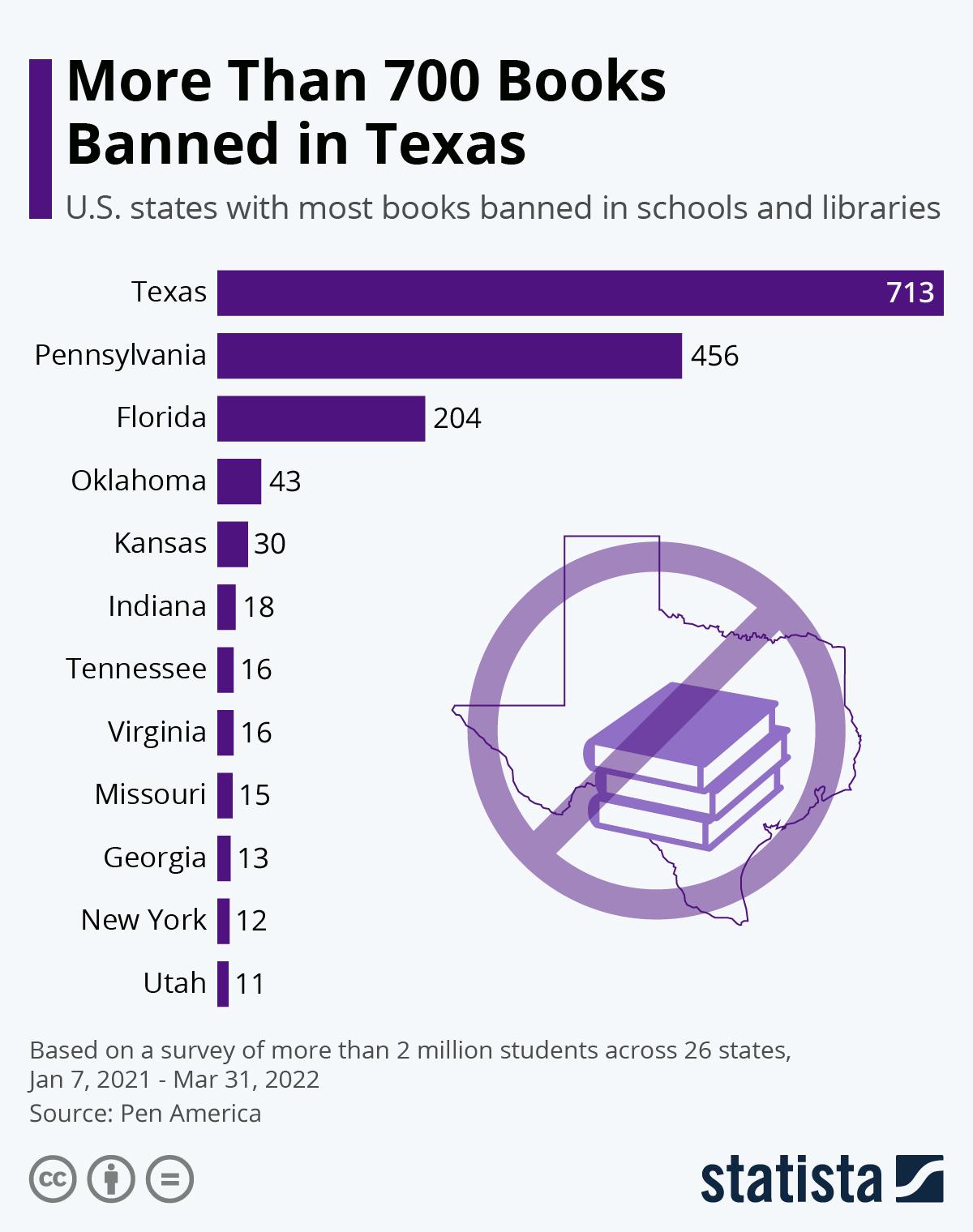 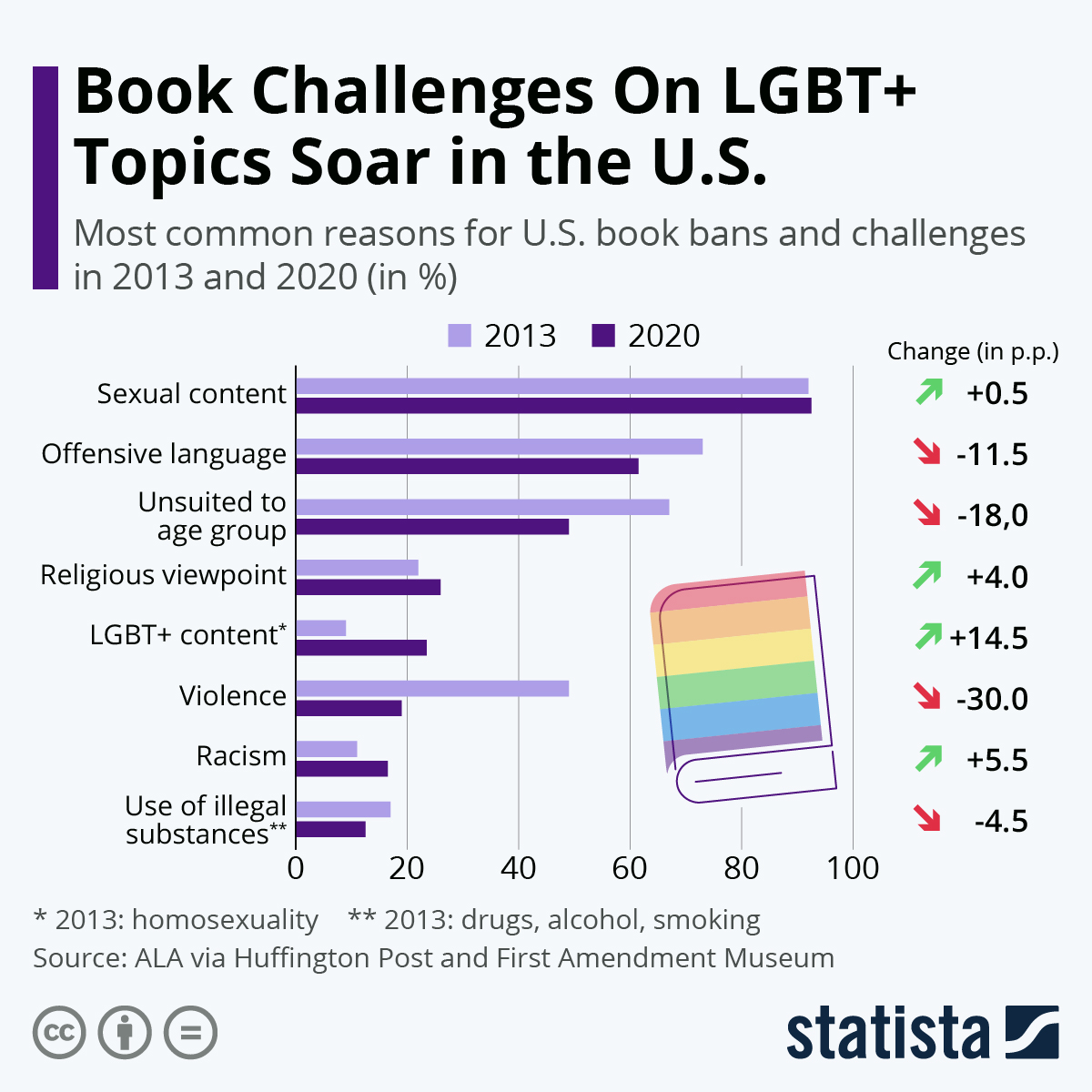 New from @serrano_alej and me: The wave of book reviews and removals that swept across Texas in the last year was driven more by politicians than parents, a Houston Chronicle analysis found.

Tennessee Education Association Pres. Tanya Coats says they’re getting complaints from educators across the state about a new law that’s creating extra work for teachers by requiring them to itemize and post all books and instructional materials on line. https://t.co/ui2H1OZSmt

This piece about book banners in Texas illustrates how this has become a national threat, driven by groups with extreme views who are better organized than in the past and supported by GOP politicians https://t.co/A1VigGFXUU

Banned Books, Censored Topics: Teaching About the Battle Over What Students Should Learn is from The NY Times Learning Network.

How book bans are affecting schools and libraries is from The Week.

A Fast-Growing Network of Conservative Groups Is Fueling a Surge in Book Bans is from The NY Times.

These posts from FLORIDA teachers having to remove every book from their classrooms because of Republican bannings are heartbreaking. Some schools are banning kids from bringing in any books because they're afraid teachers might go to jail.

This is modern day America. pic.twitter.com/KkcKIfhlby

“What Should Students Read?”

Learning About The Circus